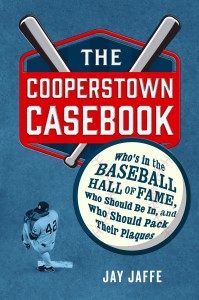 THE COOPERSTOWN CASEBOOK
Who’s in the Baseball Hall of Fame, Who Should Be In, and Who Should Pack Their Plaques
By Jay Jaffe
With a Foreword by __(TBA)__
464 pages

Tucked away in a small central New York village called Cooperstown, the National Baseball Hall of Fame and Museum is far from any big league stadium, yet it’s never far from the minds of baseball players and fans. No sports hall of fame has a membership so hallowed, qualifications so debated, or a voting process so dissected.

Since its founding in 1936, the Hall’s nebulous standards for election and arcane selection processes have created confusion among voters and some glaring mistakes in who has been recognized and bypassed. Numerous “greats” have been inducted without actually being so great, while popular but controversial players such as all-time home run leader Barry Bonds and all-time hits leader Pete Rose are on the outside looking in. So are Dick Allen, Edgar Martinez and Larry Walker, three of the greatest hitters of the past half-century, the barrier-breaking Minnie Minoso, and defensive whiz Bobby Grich.

Now Sports Illustrated writer Jay Jaffe shows us how to use his revolutionary ranking system, alongside a clear-eyed look at baseball history, to ensure that the right players are recognized. The foundation of Jaffe’s approach is his JAWS system, an acronym for the Jaffe WAR Score. Through JAWS, each candidate can be objectively compared on the basis of career and peak value to the players at his position who are already in the Hall of Fame. With a passion worthy of the annual debates over candidates, Jaffe ultimately demonstrates why the Hall of Fame still matters and how it can remain relevant in the 21st century.

Available via Amazon, Barnes and Noble, Books-a-Million, IndieBound, and Powell’s.