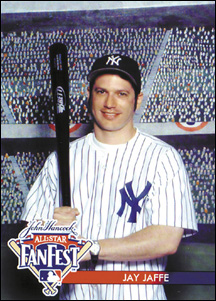 Dodgers and Yankees, what the hell is that all about? The long answer to that question might take a whole book to unravel, someday, and it’s been fertile ground for my writing. The short answer is this:

Growing up in Salt Lake City, Utah, I was a third generation Dodger fan. My grandfather, Bernard Jaffe, became a fan of those Daffy Dodgers, so the story goes, after watching star outfielder Babe Herman get hit on the head with a fly ball he was attempting to catch. He saw the Dodgers often during his residency at Brooklyn Lutheran Hospital hospital. A Jew who attended medical school first in Germany and then Austria, he wrangled a ticket to the 1936 Berlin Olympics, where he saw Jesse Owens win gold medals to spite Hitler.

Rooting for the Dodgers came naturally to Bernie, especially as they blazed the trail by signing Jacke Robinson to break the color barrier. This love of the team was passed down to my father and eventually to me. I came to baseball during the 1977-’78 seasons when the Yanks reigned over the Dodgers. As much as I loved the Dodgers — Tommy Lasorda, the Longest Running Infield, Reggie Smith, and later Fernando Valenzuela — and would follow them closely for the better part of the next 20 years, the Yanks of my youth fascinated me as well, particularly Reggie Jackson.

I moved to New York City in ’95, still hating the Yanks (I fell hard for the Mariners in that great series). But as the Dodgers fell prey to the Fox evils and the Yankees built an admirable, winning team on my doorstep, I was lured in. I still consider myself a Dodger fan first, and I still root for them. If the two teams ever meet again in the Series, that’s where my loyalties would lie. But they’re three time zones away, and it’s much easier to follow a team in your own backyard, so the Yanks have my attention for now. They’re perpetually one Steinbrenner bloodbath away from me throwing my hands up and saying to hell with it, but that’s the perils of life in the big city, I guess.