Today my Baseball Prospectus column on the Mets’ bullpen woes is not only syndicated on SportsIllustrated.com, it’s on the front page of the site for the moment. For posterity’s sake, here’s the screenshot: 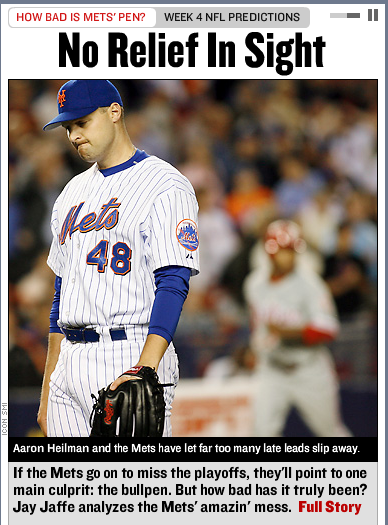 Cutting to the chase:


The sad fact is that through the first half of the season, even with [Billy] Wagner performing at a level far below his peak, the Mets actually had one of the league’s better bullpens; their 6.1 WXRL through the All-Star break ranked third in the NL behind the Phillies and Dodgers. Since then, they’ve been a league-worst 1.4 wins below replacement level as a unit. Fill-in closer Luis Ayala (-0.04 WXRL since coming over from the Nationals on Aug. 17) is an obvious culprit, but he’s hardly the only offender.

A quick peek at the individual numbers informs us that it’s not hard to recognize a systemic combination of overuse and ineffectiveness. Of the six relievers whom Jerry Manuel has called upon most frequently, five have second-half ERAs above 4.90: Ayala (5.54, including his Washington stint), Pedro Feliciano (6.38), Aaron Heilman (6.75), Duaner Sanchez (6.00), and Joe Smith (4.91); Scott Schoeneweis (4.50) is the exception. Excluding the late-arriving Ayala, that bunch has combined for 152 appearances in 63 games since the break, a breakneck 78-game pace for each over the course of a season. Feliciano (83 games), Ayala (80) and Smith (79) represent three of the six major league pitchers stretched to that exhausting plateau over the full season, with Heilman (77) not far behind. Overall the Mets rank second in the league since the break with 227 relief appearances, an average of 3.6 per game.

Driving such a frenetic pace is a massive platoon split that has Manuel chasing the “right” matchups, following a single-minded La Russa-style tactical orthodoxy at the expense of more important strategic imperatives such as conserving bullpen arms over the course of the long season. When they have the platoon advantage (righty on righty or lefty on lefty), Mets relievers have limited hitters to just .225/.299/.325; ranked by OPS, that’s an impressive fourth in the majors. However, when they don’t have the platoon advantage, they’ve been tagged at a .294/.375/.479 clip, worst in the majors. The 227-point OPS difference between situations is the highest by a wide margin; second-highest are the Brewers at 188 points, and they just whacked a manager over his platoon-related shenanigans and bullpen mismanagement. The take-home message is yet another reminder that chasing matchups can easily backfire on a skipper, either by exposing lefty specialists such as Schoeneweis (.333/.421/.509 versus righties) or Feliciano (.357/.453/.561) to the point where they face more righties than lefties, or by shunting a heavier workload to the second- or third-tier pitchers in a bullpen.

Yet for all of those woes, things might be different if Wagner were still around. Despite a superficially tidy 2.30 ERA, the five-time All-Star had accumulated just 1.5 WXRL in about two-thirds of a season, after compiling 3.8 last year and 5.9 in 2006 (second in the league). Depending upon which model of Billy Wags you use as a benchmark, that’s anywhere from one to four wins missing from his ledger. Even at its lowest, that margin may easily be the difference between a club playing its way into October and adding another season like their now-infamous 2007 collapse to give them a matched pair of late-season meltdowns.

Like just about everyone else out there, I had the Mets pegged to win last night once Daniel Murphy led off the bottom of the ninth with a triple. My one-man Ikea furniture assembly line came to a halt to watch Bob Howry strike out David Wright, and I could have sworn one of the Mets’ announcers — Ron Darling, Keith Hernandez or Gary Cohen — said something to the effect that “if Wright strikes out, this inning is over.” That’s optimism for you. Of course, Wright did strike out, and Howry escaped by intentionally walking Carlos Delgado and Carlos Beltran, getting a forceout at the plate, and then blowing away Ramon Castro. Unbelievable. I’m reminded of an expression by my friend and former coworker Lillie, a Brooklyn gal whose capacity for amazement at the ways she could be tortured by the Mets never ceases: “This fuckin’ team!” she’d say, drawing the F-bomb out until it’s longer than a mid-inning pitching change.

Meanwhile, the Brewers won behind a gritty effort by CC Sabathia, pitching on three days’ rest and striking out 11 Pirates over seven innings and 108 pitches. The race for the two NL spots tightened even more with a Phillies loss. The Postseason Odds Report says:

Clay Davenport, who runs the Odds Report, published an estimate of the various tie-related scenarios:

So if you’re simply a fan of entropy rather than any of these specific teams, today’s math says you’ve got about a 29 percent chance of some extra baseball before the playoffs begin.