Today marks the 62nd anniversary of one of the great days in American history, the day that Jackie Robinson broke baseball’s color barrier by taking the field for the Brooklyn Dodgers. While Commissioner Bud Selig has reached the reductio ad absurdum in attempting to honor Robinson by mandating that every player wear number 42 in his honor today, it’s nonetheless worth pausing a moment to reflect upon Robinson’s courage in battling racism and the impact his bold success had on this country. From the integration of the military to the Civil Rights movement to the election of Barack Obama to the United States presidency, Robinson’s actions changed the course of this country’s history in ways that are still being felt.

Though it’s just a five-minute walk from here, I didn’t make it over to the plaque at 215 Montague Street, the location of the Dodgers’ old headquarters where Branch Rickey signed Robinson to his first contract. I’ll share the photo of it instead, and pay my respects as I often do, by watching Chapter Six of Ken Burns’ Baseball tonight. 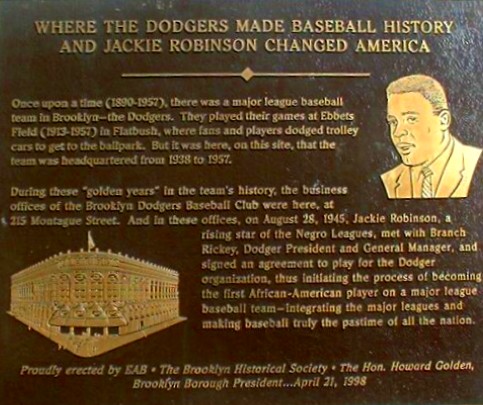 Today at Baseball Prospectus and ESPN Insider, I’ve got an article on strength of schedule which uses BP’s PECOTA-based Projected Standings and adjusts for the home field advantage (stay-at-homes win at a .550 clip) and the AL’s advantage over the NL in interleague play (the Junior Circuit wins at a .580 clip). I won’t give away the whole butcher shop by running the numbers for all 30 teams, but here are the opponents’ winning percentages for the AL East clubs, as well as a couple points from the article related to the full-season numbers and the monthly and half-season splits:

Among contenders within the same division, full-season strength of schedule effects are overstated in the grand scheme of things. Only in the NL Central do the top two teams have more than three points (.003, or half a game over the course of 162 games) of scheduling difference between them; the nine-point advantage in that division equals roughly a game and a half over the course of the season. In the AL East, the difference between the Red Sox and Rays’ schedules is four points, roughly two-thirds of a game. The AL Central’s top trio are separated by three points, and the top pairs in both Wests are effectively even. The NL East’s top trio, who have the toughest schedules of any contenders, are separated by just two points. Like heart surgery, those distinctions aren’t minor if they pertain to your chances, but in the big picture, injuries, reliever leverage, and players dramatically over- or under-producing relative to expectations will go further to shape the final standings.

Meanwhile, it’s worth noting that because they play the top-rated Yankees six times as well as the Red Sox and Rays three apiece, the Mets wind up with the toughest interleague schedule (.611 with all the adjustments).

Elsewhere at BP, intern Ben Lindbergh, whom I had the pleasure of hanging out with in Washington, DC recently, takes the baton on an old book chapter and column concept of mine, the Replacement Level Killers, focusing on players whose ungodly awful performances may have kept their teams from the playoffs or at least contention. No Yankees make the first team, but Jose Molina, Melky Cabrera and a herd of pinstriped fifth starters — Sidney Ponson, Darrell Rasner, Phil Hughes, Ian Kennedy, et al — earn Dishonorable Mentions for their 2008 performances. As well they should have. Young Mr. Lindbergh, whom colleague Steven Goldman refers to as “Colonel,” has been doing strong work on catcher fatigue and defensive efficiency of late, and may have the inside track on Matt Wieters for Rookie of the Year.