With the preseason Hit List and the final Fantasy Baseball Index Spring Update both raging out of control on my front burners, I don’t have time for a full writeup of last night’s trip to the new Yankee Stadium for the unofficial opening game against the Cubs. I will say that it feels as though the team put some idealized hybrid of Yankee Stadiums I and II on a steroid regimen, then stuck it in the middle of Times Square. Pure sensory overload — bright flashing lights with sound surrounding you from every angle, and a ginormous scoreboard video dominating the action on the field even when you’re sitting in the bleachers, as my friend Julie and I were.

It’s a mallpark, and an absurdly expensive one at that. All the bells and whistles in the world could do nothing to alleviate the ambivalence I feel about the venue. To my mind, the Yankees need a new park more than ever.

As big and bold as the scoreboard is, it offers a dearth of real information; nowhere did the names of the pitchers appear, so because we arrived in the middle of the first inning due to subway havoc — just in time to see Derek Jeter step into the box — I went the entire evening without figuring out who actually started for the Cubs (it was Ted Lilly). In fact, I had a hard time paying attention at all, in part because it was an exhibition wrapped in a spectacle and in part because sitting in the bleachers makes one feel as though anything that happens in the infield is a distant rumor even under the best of circumstances. The new bleachers do have a steeper pitch to them, which at least makes seeing the outfield a bit easier.

Undoubtedly the highlight of the game came when Robinson Cano smacked a home run in the third inning, the first in the new park’s history. It landed three rows in front of us, and soon afterward, stadium security came down to ask the gentleman who recovered the ball if he’d be willing to make a deal. He and his female companion left with them while their friends looked on with concern, but they came back a couple of innings later still clutching the ball: no deal.

As it turns out, Julie and I wound up visible on the brief NY1 highlight loop featuring the home run: 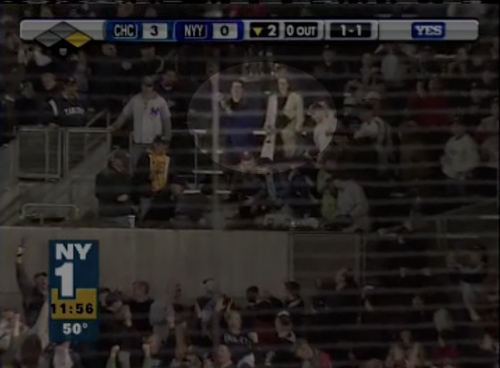 You can see me stand to applaud at the end of the clip here, for whatever that’s worth.

Alex Belth weighs in with a more substantial take on attending the game, while Neil deMause has a pair of articles regarding the stadium’s opening and the impressions gleaned from attending Thursday’s workout, one at the Village Voice and the other at Baseball Prospectus.