Thursday found me at the News Corporation building for lunch with Rupert Murdoch (not really) and an appearance on the FoxNews.com streaming webcast “The Strategy Room” (yes, really). Given the number of media hits I’ve done in the service of promoting Baseball Prospectus 2009 over the past several weeks, I figured this would be a typically short promote-the-book spot where BP colleague Steve Goldman and I breezed through the usual topics — the book itself, PECOTA, the division races, the local nines, Alex Rodriguez and steroids, and the day’s headlines, which unfortunately included the tragic death of Angels pitching prospect Nick Adenhart. Not exactly territory to go on auto-pilot, but well within my comfort zone.

“The Strategy Room” turned out to be a frenetic hour-long roundtable discussion in which Steve and I were joined by host Brian Kilmeade as well as humorist (that’s what the chyron said) Geno Bisconte and one Richard “Big Daddy” Salgado, an insurance and estate planner for athletes (over the last five years, his company “has insured twenty-five 1st Round picks for disability and career ending insurance,” according to his website). As members of this motley crew, we were expected to hold court not only on baseball but also football, golf, and other sports (surprisingly little if any basketball was discussed), and for an entire hour at that.

The show was a bit of a free-for-all. While Kilmeade pitched us topics — giving the BPers first crack at the baseball questions, Big Daddy the football questions — we did have to compete for air time as we rolled through CC Sabathia, Joba Chamberlain, Jose Canseco, Joe Girardi, Ben Roethlisberger, Mr. and Mrs. Kurt Warner, Plaxico Burress, Tiger Woods, Jon Daly, the Greg Norman-Chris Evert power couple, and other topics. Seated between the high-energy Bisconte, whose gleeful mugging for the camera, tweaking of the host, and on-camera sending of text messages suggested he was a veteran of this setup, and the imposing but genial Salgado, a mountain of a man, on my left, I was in danger of disappearing into the woodwork. In this four-minute clip centered around the Yankees’ slow start (0-2!!!) and the possibility that Girardi might be fired, you can see my similarly slow start. I struggle to get a word in edgewise until finally seeing the opening and running to daylight.

By the end of the hour, I had loosened up and might have even strained my jaw from laughing. It turned out to be ridiculous fun, even if I was a little out of my element, and I wish there were more clips to share. Instead you get screenshots: 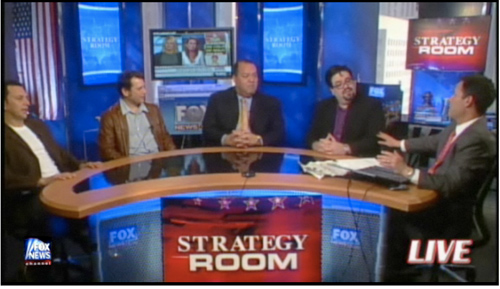 Anyway, it made for an enjoyable afternoon, but not until I was back home later in the evening, signing off from recording a segment with Mike Ferrin of XM’s “MLB Home Plate,” did I realize the day’s significance: eight years ago I laid the cornerstone for this site with a clumsy but heartfelt piece on the passing of Willie Stargell. When I started out jotting down reminiscences of my childhood baseball heroes and opinions on the action of the day, who knew that years later I’d reach the point where being on TV, radio, newsstands and in books and even bookstores — to say nothing of multiple times per week on Baseball Prospectus and occasionally on ESPN.com — while talking about or writing about baseball would become almost routine? It’s not all about FutilityInfielder.com anymore, it’s about being lucky enough to occupy this niche with so many other writers I admire and friends that I’ve made.

Every time I pass this milepost I’m reminded of what a fantastic ride it’s been, and how much fun it continues to be. I’m deeply grateful to all you for sharing it with me.