“When the legend becomes fact, print the legend.”
— Maxwell Scott, The Man Who Shot Liberty Valance

That Satchel Paige was one of the greatest baseball players of all time isn’t exactly a controversial topic these days. Even casual fans are probably familiar with the colorful Paige’s aphorisms (“Don’t look back. Something might be gaining on you”), and have some understanding not only of how brightly he shone amid the high-caliber talent which was so cruelly deprived of the opportunity to play major league baseball by the game’s segregation, but also the fact that even a forty-something-year-old version of the pitcher found success at the major league level once Jackie Robinson shattered the color barrier. It’s certainly a tale worth telling and retelling, though as engaging as the oft-repeated lore surrounding the pitcher’s career and character is, repetition has tended to distort and oversimplify the truth about him.

Luckily, Larry Tye has come along to boldly confront the myths surrounding Paige in an excellent new biography, Satchel: The Life and Times of an American Legend. I received a copy in the mail several weeks ago and had been itching to dive into its pages before finally getting an opportunity during my recent trip to Buenos Aires. 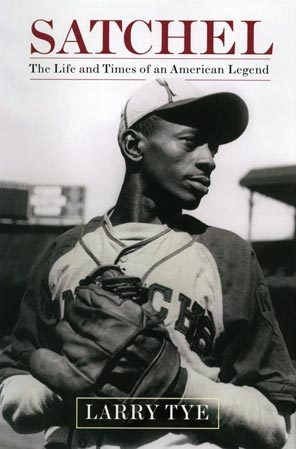 Many of those myths surrounding Paige, of course, were of the pitcher’s own making via interviews and as-told-to autobiographies, and they were a crucial part of his public relations strategy. In his preface to the book (published as an excerpt at Bronx Banter), Tye explains Paige’s obfuscation about his birthdate:


Satchel knew that, despite being the fastest, winningest pitcher alive, being black meant he never would get the attention he deserved. That was easy to see in the backwaters of the Negro Leagues but it remained true when he hit the Majors at age forty-two, with accusations flying that his signing was a mere stunt. He needed an edge, a bit of mystery, to romance sportswriters and fans. Longevity offered the perfect platform. “They want me to be old,” Satchel said, “so I give ‘em what they want. Seems they get a bigger kick out of an old man throwing strikeouts.” He feigned exasperation when reporters pressed to know the secret of his birth, insisting, “I want to be the onliest man in the United States that nobody knows nothin’ about.” In fact he wanted just the opposite: Satchel masterfully exploited his lost birthday to ensure the world would remember his long life.

It was not a random image Satchel crafted for himself but one he knew played perfectly into perceptions whites had back then of blacks. It was a persona of agelessness and fecklessness, one where a family’s entire history could be written into a faded bible and a goat could devour both. The black man in the era of Jim Crow was not expected to have human proportions at all, certainly none worth documenting in public records or engraving for posterity. He was a phantom, without the dignity of a real name (hence the nickname Satchel), a rational mother (Satchel’s mother was so confused she supposedly mixed him up with his brother), or an age certain (“Nobody knows how complicated I am,” he once said. “All they want to know is how old I am.”). That is precisely the image that nervous white owners relished when they signed the first black ballplayers. Few inquired where the pioneers came from or wanted to hear about their struggles. In these athletes’ very anonymity lay their value.

Playing to social stereotypes the way he did with his age is just half the story of Satchel Paige, although it is the half most told. While many dismissed him as a Stepin Fetchit if not an Uncle Tom, this book makes clear that he was something else entirely – a quiet subversive, defying Uncle Tom and Jim Crow. Told all his life that black lives matter less than white ones, he teased journalists by adding or subtracting years each time they asked his age, then asking them, “How old would you be if you didn’t know how old you were?” Relegated by statute and custom to the shadows of the Negro Leagues, he fed Uncle Sam shadowy information on his provenance. Yet growing up in the Deep South he knew better than to flaunt the rules openly, so he did it opaquely. He made his relationships with the press and the public into a game, using insubordination and indirection to challenge his segregated surroundings.

While Tye digs deep — the book’s bibliography and end notes are both at least 35 pages long, and he interviewed more than 200 Negro League and major league opponents and teammates — and lays waste to some of the tall tales surrounding Paige, what emerges is an altogether more nuanced and ultimately more compelling version of the ageless pitcher. Some of Paige’s embellishments, such as his account of his pitching the championship finale for Dragones de Ciudad Trujillo in the Dominican Republic in 1937, don’t stand up to the light of day. Others, such as the masterful control which allowed him to throw the ball over a chewing gum wrapper with amazing consistency or his brazen penchant for calling in his outfielders and then getting the crucial strikeout(s), he finds well-documented.

As always, there are the quotes, most of which really did come out of Paige’s mouth in some form or other. Asked by his manager if he threw fast consistently, he replied, “No sir, i do it all the time.” Asked about his philosophy of pitching, he warned, “Bases on balls is the curse of a nation… throw strikes at all times. Unless you don’t want to.” Of course, it’s interesting to learn that the six rules for staying young for which he’s credited were partly the work of Collier‘s Richard Donovan, as the sidebar to a three-part profile from 1953. And, as Tye notes, not always taken to heart by the font of wisdom from which they supposedly flowed.

Through it all, Tye meticulously tracks Paige’s peripatetic ways, noting not only his myriad stops both on his way up (he began pitching professionally in Chattanooga in 1926) and down (his last major league appearance was with the Kansas City A’s in 1965; his last regular duty was with the Triple-A Miami Marlins from 1956-1958) but also his numerous barnstorming tours, not to mention the countless times he jumped teams to collect a bigger payday, often by less-than-honorably walking out on his contract. The book’s appendix even has a well-compiled statistical thumbnail, collecting the best-researched data on Paige’s time in the Negro Leagues, majors, minors, East-West All-Star Games, North Dakota, California Winter League and Latin leagues (though it misses two late stints in the minors in Portland and Hampton, Virginia).

The author offers a good deal of insight into the conditions Paige played under and the men he played for, such as Pittsburgh Crawfords owner Gus Greenlee and Kansas City Monarchs co-owner J.L. Wilkinson (whose business partner, Tom Baird, was a member of the Ku Klux Klan). If I have a quibble about the book it’s that he doesn’t go into great enough detail about many of the men he played with and against, particularly Josh Gibson, though the portraits of barnstorming rivals Dizzy Dean and Bob Feller do stand out. He’s acutely aware of the generation gap between Paige and Robinson, or Paige and Indians teammate Larry Doby, who broke the American League color line in July 1947, and doesn’t sugarcoat Paige’s mixed emotions at being passed over as the man to break the majors’ color barrier.

In all, Tye’s created an impressive work that never feels bogged down by its lofty ambitions or the weight of the author’s research; his prose is a breeze, for the most part. He makes a convincing case for Paige not only as one of baseball’s all-time greats but as an agent of social change, covering seemingly millions of miles as he lay the groundwork for the game’s integration, delighting fans and winning over doubters and even the occasional bigot while building a legacy that might be matched only by Babe Ruth’s in its importance to the game and the nation. This one’s a keeper.

For more about the book, see Tye’s web site.