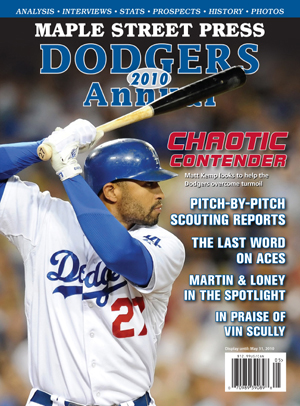 Earlier this month, my pal Jon Weisman migrated his great Dodger Thoughts blog from the Los Angeles Times to the new ESPN Los Angeles family. Among his first posts is one which directly involves me. Jon is the editor of the forthcoming Dodgers 2010 Annual from Maple Street Press, the same folks who publish Bombers Broadside, to which I contributed for the 2007 and 2008 editions. Here’s Jon’s rundown of the contents of the glossy 128-page book:

It’s quite a star-studded cast, and I’m honored to be part of it. Maple Street Press is also doing annuals of the Yankees, Red Sox, Twins, Phillies, Mets, Mariners, Cubs and Cardinals, and via the Twitscape, it sounds as though at least some of those books are already shipping. Each one goes for $12.99.

Elsewhere at Dodger Thoughts’ new home, Jon’s got a lengthy, must-read piece for which he interviewed embattled Dodger owner Frank McCourt one-on-one for an hour, discussing the controversies that have embroiled the team in recent months — the divorce proceedings between the owner and wife/former team CEO Jamie McCourt, the decisions not to offer arbitration to free agents Randy Wolf and Orlando Hudson, the team’s recent failures to spend in a manner commensurate with their standing in the amateur draft, their propensity for surrendering top-notch prospects in trade in exchange for holding the line on salary. I’ve detailed these controversies multiple times myself, so I welcome a fresh perspective, particularly from the man who signs the checks. Here’s what McCourt (and Weisman) have to say about the July 2008 trade in which the Dodgers sent catching prospect Carlos Santana (no, not the guitarist) — now considered one of the game’s top hitting prospects — to the Indians in a deal for Casey Blake:


If there was a moment that really seemed to call into question the Dodgers’ ability to commit to prospects, it was when the team traded Carlos Santana and Jonathan Meloan in mid-2008 for a three-month test run of Casey Blake. (Blake re-signed with the Dodgers as a free agent after the 2008 season.) It was widely reported, to the point that almost no doubt remained, that the Dodgers included Santana, a catcher who was having an explosive year in A ball, so that they wouldn’t have to pay approximately $2 million in Blake’s remaining ’08 salary.

McCourt said in the interview that he had “no idea” about that aspect of the trade, that this was general manager Ned Colletti’s territory. This is an example of the plausible deniability McCourt periodically exercises that seems not quite so plausible, given the level of detail with which he’ll talk about other aspects of the Dodgers. Subsequent to the interview, neither Colletti nor anyone else with the Dodgers would comment about this on the record.

However, a source within the Dodgers organization insisted that the following was true: The Indians were not going to trade Blake to the Dodgers unless they got Santana in the deal. His inclusion had nothing to do with money.

If you know my policy on anonymous sources, you know that I always say you should take them with a grain of salt. So please do. But also realize that the original report was never confirmed on the record, either.

In any case, there’s still a baseball debate to be had on the trade, even if Santana was the centerpiece for the Indians rather than a money-saving throw-in. Was Blake worth the price of a red-hot catching prospect? Blake had immediate value but was aging. Santana had all the promise in the world, though he was a 22-year-old in A ball who might end up moving out from behind the plate defensively.

Even if the original reports about the trade were true and the Dodgers did it to save $2 million, it’s not like they haven’t spent that $2 million and more elsewhere since then, and rather recklessly at times to boot (Guillermo Mota fits this bill rather perfectly). On the other hand, if my source is correct and the Dodgers simply believed Santana and Meloan for Blake was a smart move, was the team right to do it? It was debatable then, is debatable now even after Blake’s presence on two division-winning Dodger teams, and will continue to be debatable for some time to come.

Focusing on the $2 million distracts from the real issue, which is how well the Dodgers evaluate players and needs, whether it’s Santana for Blake, Andy LaRoche for Manny Ramirez, Tony Abreu for Jon Garland, and so on.

The entire piece is well worth reading, so kudos to Jon on that front. I’m not going to pick apart McCourt’s replies, many of which do deserve some deeper dissection than the piece provides; Dodger Divorce’s Josh Fisher is already hard at work on that front.

Elsewhere in the Dodger universe, Baseball Prospectus colleague Will Carroll created a stir with the release of the Team Health Reports spreadsheet, which shows all five of the Dodgers’ starting pitchers — Chad Billingsley, Clayton Kershaw, Hiroki Kuroda, Vicente Padilla and James McDonald, though the latter is just one of a handful of fifth-starter candidates — projected as red lights, meaning they have a 50 percent chance of winding up on the disabled list due to various factors — age, past injury history, team injury history, and PECOTA attrition rate — applied to an actuarial table based upon 10 years of MLB data clustered by age and position. The Dodgers’ THR itself discussing the ratings for each player hasn’t been published, but the intrepid Mr. Weisman pre-emptively interviewed Will, who had this to say about the pitchers:


I doubt anyone will quibble with Kuroda or Kershaw as risks. Kuroda’s a litle inflated in that he was out for something that’s unpredictable [a line drive to the noggin which caused a concussion] and then going out again [due to a herniated disc in his neck] makes it look worse than I think it really was. Kershaw is young, threw a lot of innings (not outrageous, but an increase) and is expected to have another increase this year. Risky, yes. Red, yes, but my god, the upside. McDonald is a case where if he’s the five starter on Day 1 and stays there all year, his innings increase will be insane. I doubt the Dodgers would ignore this, but I can’t project that forward.

As for Billingsley – who I don’t hate – he wore down in the latter stages of the season. He was pretty solid, but if I tell you that Dan Haren has a similar pattern, would it bother you? Risk is not reality, but the fact is that every single one of the Dodgers starters as we speak now is a demonstrable risk. All goes well, no worries and the Dodgers run away with the division. One thing goes bad? Meh, most teams can survive. Two or three … not so much, especially if they have to start rushing some of their good young arms.

Yikes. As noted before, McDonald has some competition among the ranks for the fifth starter job, including a couple of guys who popped up on colleague Kevin Goldstein’s Top 11 Prospects list earlier this week, Scott Elbert and Josh Lindblom. The list is headed by shortstop Dee Gordon, son of former Yankees reliever Tom Gordon, and anagram for “Dodger One,” for whatever that’s worth (you’re free to go to town on his full name, Devaris Strange-Gordon, if you like). Here’s the list as well as Kevin’s writeup of Son of Flash:

Year in Review: A highly athletic shortstop, Gordon earned Midwest League co-MVP honors in a stunning full-season debut.
The Good: Gordon’s tools are the best in the system by a mile, and among the best in the game, with one scout calling him, “A Jimmy Rollins starter kit.” He has outstanding hand-eye coordination and a knack for contact; he has the potential to develop enough power for 10-15 home runs annually. He’s a pure burner who led the league with 73 stolen bases, and he’s a quick-twitch athlete with well above-average range and arm strength.
The Bad: Gordon is quite raw, and while that creates plenty of room for excitement, as he’s been able to produce big numbers on sheer athleticism, there’s also concern, as he’s far less refined than most players his age. He needs to improve his plate discipline and work on becoming more consistent defensively, but both of those issues saw considerable improvement as the 2009 season wore on.
Ephemera: Dodgers farm director DeJon Watson was a roommate with Gordon’s father, Tom, when both were minor-leaguers in the Royals system.
Perfect World Projection: He’s an All-Star shortstop.
Path to the Big Leagues: Gordon needs at least two more years in the minors, and there’s still a chance he’ll need to move to center field.
Timetable: Despite his performance, most see Gordon as a one-step-at-a-time player, so he’ll likely spend most, if not all of 2010 at High-A Inland Empire.

A five-star prospect is one which by Kevin’s definition ranks among the top 50 prospects in the game in his forthcoming Top 100 Prospects list. While one might be skeptical about how raw Gordon is — he didn’t commit to playing baseball until his senior year of high school — it’s worth noting that the Dodgers were able to spin a similarly raw Matt Kemp into an All-Star caliber player. In the comments to the piece, Kevin elaborated on Gordon, “As you are watching a guy hit .300, steal 70+ bases and get to balls at short no human should get to, and you realize he’s doing it without really having much of an idea of what he’s doing out there. That creates tons of understandable excitement, but it doesn’t come without its reservations as well.”

Whew. It never rains but it pours around here, right? Especially when it snows…