Jim Marshall, one of the great rock and roll photographers, passed away on Wednesday at the age of 74. Marshall photographed the Beatles, the Rolling Stones, the Who, Jimi Hendrix, Janis Joplin and others. His work was recently featured at a Brooklyn Museum exhibit called “Who Shot Rock and Roll: A Photographic History, 1955 to the Present,” and you can see a selection of his iconic photos at his own website. It’s this iconic photograph of Johnny Cash for which I’ll always remember him:

That bad-ass shot was taken at San Quentin Prison in 1969, when Cash performed a famous concert for the inmates which was filmed for documented on the incredible Johnny Cash at San Quentin. On that album, the bond between the great performer and his audience audibly collides with the tension of the prison security. When Cash sings the composed-for-the-occasion “San Quentin” for the second time in a row, you can practically hear the guards drawing their truncheons, ready to bust heads in a full-scale riot. No live album has ever carried such an edge.

In the deluxe repackaged version which was released a few years ago, here’s what Cash had to say about the photo:


During the show at San Quentin in 1969, it seemed that Granada TV was on stage in front of me. At some point I walked around my microphone and yelled, “Clear the stage! I can’t see my audience!” Nobody moved. So I gave them “the bird.” Hence that picture.

Here’s what Sylvie Simmons’ liner notes have to say:


Cash snarls like a punk rocker at the camera with his middle finger raised… Whatever brought it on, nothing sums up the defiant, macho, outlaw Johnny Cash quite like that picture and the concert it was taken at. As Bob Johnston, At San Quentin‘s producer, recalls, “God, I’d never seen anything like it. When Cash sang ‘San Quentin, may you rot and burn in hell,’ they were on the tables yelling. A lot of the guards were up on the runways with loaded guns, backing up the doors, and I’m backed up to the door with all of these guards with guns, and I’m thinking, ‘Man! I should have brought Tammy Wynette and George Jones — anybody but Johnny Cash!'”

Several years ago, I acquired a poster of the photo, cropped to serve as a promotion for American Recordings celebrating The Man In Black’s unlikely latter-day comeback album Unchained winning the Grammy for Best Country Album. The inscription in the upper left reads: “American Recordings and Johnny Cash would like to acknowledge the Nashville Music establishment and country radio for your support.”

Cracks me up every time, which is why I have that poster hanging above my desk. Johnny Cash may be giving someone the finger, but to borrow a line from one of his singer pals, it ain’t me, babe. 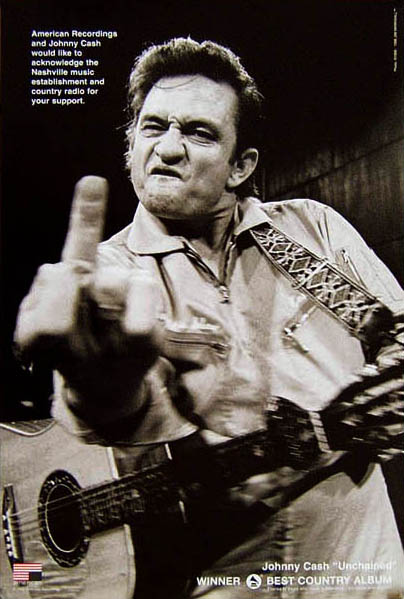