Today marks the 63rd anniversary of one of the great days in American history, the day that Jackie Robinson broke baseball’s color barrier by taking the field for the Brooklyn Dodgers. It’s a day to pause a moment and reflect upon Robinson’s immeasurable courage in battling racism, and the impact his bold success had on this country. From the integration of the military to the Civil Rights movement to the election of Barack Obama to the United States presidency, Robinson’s arrival in the major leagues forced America to live up to its ideals of equality, and his actions changed the course of this country’s history in ways that continue to be felt.

Given that it was a gorgeous day today in Brooklyn, I decked myself out in my Brooklyn Dodgers cap and Mitchell and Ness hoodie and took time out from my work to make a five-minute walk to a plaque at 215 Montague Street, the location of the Dodgers’ old headquarters, where Branch Rickey signed Robinson to his first contract in 1945: 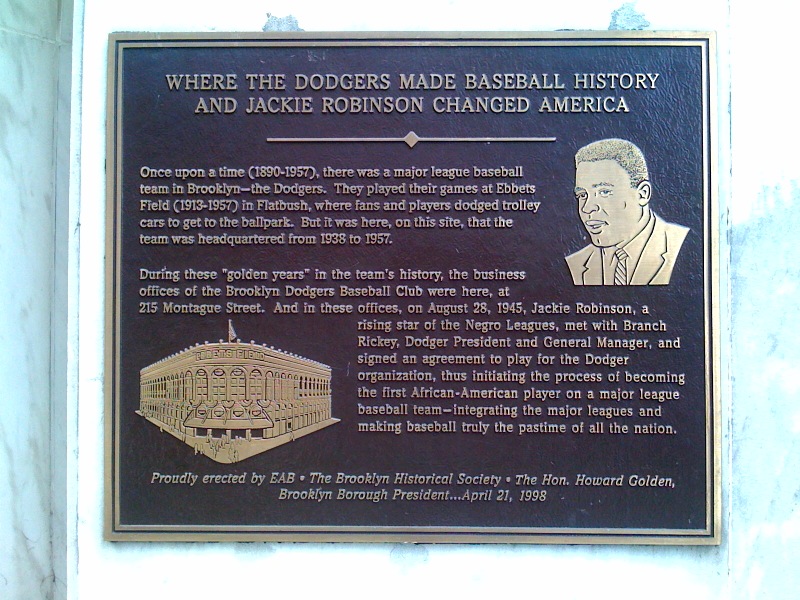 MLB tries to make a big to-do about Jackie Robinson Day. For starters, there’s commissioner Bud Selig’s reductio ad absurdum which mandates that every player wear number 42 in Robinson’s honor. It’s a gesture that’s supposed to express the unity of all players in uniform regardless of color or background, and in a way it does. Nonetheless, it’s also rather silly. How many announcers does it take to quip, “You can’t tell the players even with a scorecard today?” before the whole thing turns into a joke?

More troubling than that is the fact that MLB scarcely puts its money where its mouth is regarding the day. In an industry whose revenues are around $6 billion (going by the latest Forbes figures), today’s Barry Bloom piece on MLB.com trumpets the following:


Two years ago, MLB made a major $1.2 million commitment to the Robinson Foundation over a four-year period to fund scholarships in the name of each of the 30 clubs. Each year, $300,000 is invested, representing 30 scholorships [sic] worth $10,000.

Derek Jeter, the Yankees captain and all-time hits leader, donates a scholarship in perpetuity at the $250,000 level. He remains the only Major League player that endows a Robinson scholarship.

DuPuy said that MLB’s contribution has no time limit and will go beyond the current term of agreement.

I’m sorry, but $1.2 million? That doesn’t even buy you a futility infielder these days, and $300,000 isn’t even the major league minimum salary anymore. Hell, one benevolent superstar’s own foundation nearly equals the entire MLB contribution!

While the money is certainly important to the people who receive it, that’s still the equivalent of pocket change left on the nightstand as opposed to a truly meaningful contribution. If baseball really wanted to make an impact in Robinson’s name, whether via the Robinson Foundation, the Reviving Baseball in Inner Cities initiative, which combats the shrinking participation in the game by African Americans, or other worthy organizations, it would donate a single day’s gate receipts instead of contributing such a token amount.

According to the annual Team Marketing Report, the average non-premium ticket price this year is $26.74. Multiply that by the 2009 average attendance of 30,323 per game times 15 home games around the majors and you’ve got about $12.2 million to spread around, roughly 40 times the amount MLB is trumpeting about contributing annually. Sure, weekday attendance might actually make for smaller per-game attendance, but we haven’t even included premium ticket prices in the equation. In any event, we’re talking about a substantially larger amount of money being spread around to honor baseball’s most important contribution this country’s history.

Come on, Bud, step up to the plate.