On Saturday I fulfilled a long-held dream, one that I could barely have conceived of when I started this blog back in 2001: I attended a game as a member of the working media, with access to the press box, the locker rooms and the field, the whole behind-the-scenes megillah. Credential in hand (or more accurately, around my neck), I watched the Yankees take on the Twins at Yankee Stadium and wrote up the game — won 7-1 by the Yanks — for Baseball Prospectus. 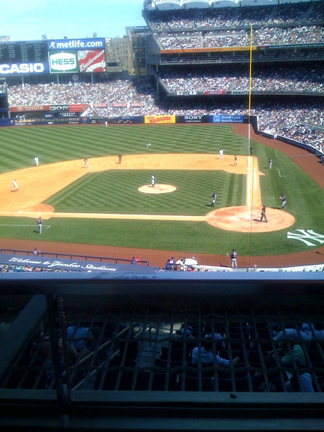 As I wrote at BP, the matchup featured two southpaws on comeback trails of sorts in Francisco Liriano and Andy Pettitte, the former only starting to re-emerge as an ace after three years in the weeds following Tommy John surgery, the latter simply coming back from a missed turn in the rotation. On this day, Pettitte got the better of the two, shutting the Twins out for 6.1 innings while allowing just two hits thanks to some spiffy defense:

That [2-0] score held until the sixth, punctuated by by a few notable defensive plays by the pinstripes. In the third inning, [Nick] Swisher laid out for a diving catch of a Butera bloop. Gardner, who would later concede that catch topped his own (“That’s what [Swisher] says, too,” he told reporters later) nearly collided with Robinson Cano Derek Jeter while battling the sun to catch Denard Span’s short popup one batter later. In the fourth, Cano would snare consecutive line drives off the M&M boys, with Morneau’s shot leading to Orlando Hudson being doubled off first to end the inning.

Pettitte had to dodge the M&M boys [Joe Mauer and Justin Morneau] one more time on the day, which made for a worthwhile spectacle. With two outs in the sixth and the lead still at two runs, he walked both Span and Hudson on a total of nine pitches, bringing up Mauer for the game’s pivotal moment. Petitte fell behind 3-0 on a trio of low-and-away pitches as the Yankee bullpen sprung to life, but he got a called strike on the outside corner. On his 26th pitch of the inning, he induced Mauer to sky a high fly ball to the fattest part of the ballpark in left center. Some 46,347 fans watched with bated breath as Gardner ran the ball down on the warning track to end the threat.

“In the first inning, I felt sharp but it wasn’t a great day as far as continuing to hold it, conceded Pettitte after the game. “I made some mistakes and the guys made great plays behind me. I got a little tired in the sixth inning, my legs went on me a little bit, I lost my focus, and almost let the game get away from me, but I was able to get the fly ball there. I felt very fortunate.”

Despite flagging, Pettitte returned to battle Morneau in the seventh, retiring him on a generous called strike on the outside of the plate. It was one of just two Ks he’d have on the day to match the bare two hits he allowed, both singles. In all, he generated just three swings and misses over the course of his 95-pitch afternoon, but got ahead of 14 out of 22 hitters with first-pitch strikes, and wound up providing the Yankees with yet another bend-but-don’t-break performance in a seemingly endless line of such outings.

As they’d done the night before, the Yankees broke the game open against the Twins relievers, with Mark Teixeira and Jorge Posada both connecting for long two-run homers:

For the second night in a row, the Twins bullpen made a hash of things in the seventh — something of a surprise given that they’d come into the series with a Fair Run Average well under 3.00 and the league’s WXRL lead (they’re now down to second). Jesse Crain quickly got ahead of Swisher 0-2, then broke out his shovel to dig a big hole by nibbling his way to four straight balls. He worked Teixeira to a full count, but the Yankee first baseman crushed a 94 mph fastball for a towering homer that landed in the narrow club level in right field, a difficult target to hit from 429 feet away.

As noted in this week’s Hit List, Teixeira’s simply been Mr. May. After hitting just .136/.300/.259 in April — the worst numbers he’s ever put up over the course of a full month — he’s at a torrid .333/.406/.649 since the calendar turned, with five homers in 64 plate appearances. Lobbed a batting practice fastball after the game as far as what had changed for him this month, he didn’t miss: “Just hitting the ball harder and they’re finding holes.” So true: his BABIP this month is .333, up from .148 in April.

That was my softball question, and while it certainly didn’t read like I received a particularly substantial answer, there was truth to what Teixiera was saying. Even checking the Fangraphs splits, his line drive percentage is up from 19.0 percent in April to 23.5 percent in May, the kind of difference that could change a BABIP about 40 or 50 points.

Still, listening to the rather rote answers coming out of the players’ mouths pre- and postsgame — I heard Curtis Granderson and Nick Swisher debrief the reporters on the status of their injuries, and  several others discuss their afternoon results —it wasn’t hard to see why such stuff makes up the most tedious part of ballpark reporting: the players generally don’t have a lot to say, and if they do, they’re unlikely to spill it in this setting.

My day at the park was a surreal experience, and while hardly a letdown, it did produce some mixed emotions:

I have to admit that the day felt a bit anticlimactic, perhaps because I don’t hold the new ballpark in the same esteem I held its predecessor; even in the deep recesses of the carpeted clubhouses, it still has that new stadium smell instead of the old Stadium’s weathered if spartan charm. Perhaps also because I needed to show restraint in the press box, channeling my reflexive urge to cheer into private text messages to friends and semi-detatched expressions of marveling wonder (“wow, what a play”) rather than uncurbed enthusiasm.

Still, I’d be lying through my teeth if I didn’t admit that this provided me with a fresh point of view after some 150 trips to the ballparks in the Bronx. I got a particular charge out of walking onto the field to watch a few minutes of batting practice on a gorgeously sunny day, seeing the venerable “Core Four” — Jeter, Posada, Pettitte and Mariano Rivera, who’ve meant so much to me as a fan over the years — milling about both before and after the game, standing among the horde of cameras and microphones as Pettitte, Gardner, Cervelli and Teixeira discussed their afternoons, and even lobbing my softball question to the latter, who certainly wasn’t wrong given those BABIP numbers.

This was only the first of what I hope will be many trips to ballparks — Yankee Stadium, CitiField, and points beyond — in such a capacity. I’m damn proud to have earned my way there, and look forward to going back for much more soon.