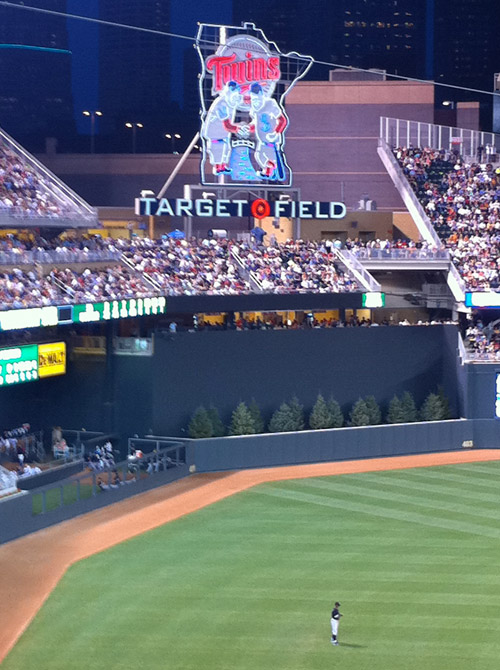 Over at Baseball Prospectus, I’ve got a writeup of last week’s trip to Target Field in Minneapolis:

For the second consecutive summer, a wedding brought me to Minnesota, affording me the opportunity to check another major-league ballpark off my slowly-growing list.* The contrast between the two Twins venues couldn’t have been more stark, but the common denominator was a boisterous fan base backing a playoff contender while affirming that baseball is alive and well in the Gopher State, lest anyone have any doubts. While the Twins hardly resembled that contender on this particular night, as they were trounced 11-0 by the White Sox, their recent roll has given them a leg up on an October berth, their sixth in the nine years since Bud Selig and company tried to shut them down—ostensibly due to owner Carl Pohlad’s inability to secure public financing for a new ballpark.

Last May, I finally visited the 27-year-old Metrodome, a venue — ballpark is far too generous — which I’d always regarded from afar with a mixture of reverence and disgust. Though not a Twins fan by nature, I’d pulled hard for Hrbie, Kirby, and company in the 1987 and 1991 World Series, two of the best Fall Classics of my lifetime. The Dome itself should have been voted full playoff shares in those years given the home-field advantage it provided, as the underdog Twins went 8-0 amid deafening decibel levels to defeat the Cardinals and Braves. I don’t care how awful a stadium is, if a championship has been won there, particularly an unlikely one (or two), that’s an indelible piece of history, a distinction which rescues dives as disparate as Shea Stadium and the Dome.

On the other hand, baseball on artificial turf, in a domed stadium, is as inherently alien and unappealing as canned lettuce. Which isn’t to say I didn’t have fun at that particular game, but after taking in its plastic ugliness of the field from the distant, oddly-angled seats, I could see why the place drew frequent comparisons to a mausoleum.

Target Field will never be confused with a mausoleum, however. It’s a spacious open-air park with real grass and distant fences (339 feet down the left field line, 328 down the right field line, 411 feet to center field) that have made it the majors’ third-toughest park in which to homer this year (0.65 per team a game), though the trees behind the center field wall felt a bit forced. Its angles give it a distinctly modern feel, and unlike many of the other mallparks built over the past two decades, it carries a relatively small reserve of retro nostalgia. The bulk of the latter arrives via the giant neon “Minnie & Paul” logo in center field. Introduced in 1961, revised in 1972, and refined in 2002, the logo shows two cartoonish ballplayers shaking hands across the Mississippi River, one representing the Minneapolis Millers and the other the St. Paul Saints, the two mainstay minor-league franchises predating the Twins’ arrival.

We had a fun time gorging ourselves on a variety of Midwestern fried goodies while jeering Carl Pavano, who got his ass handed to him (6 innings, 15 hits, 7 runs), thereby proving that he still can’t pitch in front of Yankees fans.