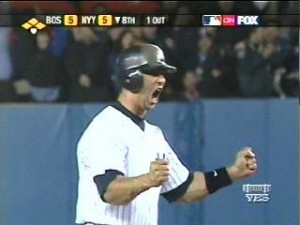 Hip Hulk Posada's game-tying double in the 2003 ALCS Game Seven was my favorite moment of his career.

Jorge Posada officially announced his retirement today, in an emotional ceremony at Yankee Stadium, the second member of the so-called “Core Four” — Andy Pettitte, Derek Jeter, and Mariano Rivera being the others — to walk into the sunset. A fiery competitor, a tenacious hitter, and a passionate leader — if not a great receiver, he did at least chaperone David Wells’ perfect game — he was a vital part of six pennant winners and four world champions.

Posada produced more than his share of great memories over the course of his 15 years and change. Three of them stand out to me as particularly special. The first was at Game Three of the 2001 World Series against the Diamondbacks. President George W. Bush was on hand to throw out the first pitch, and because of that, a security clusterfuck that had stopped the 4 train at 149th Street prevented me from getting into Yankee Stadium in time for the start of the game. Handed a miniature American flag as I finally gained entry, I climbed to the upper reaches of the ballpark behind home plate and reached my nosebleed seat just in time to watch Posada put the game’s first run on the board via a solo homer off Diamondbacks starter Brian Anderson. I hadn’t even sat down, and here I was, part of a standing ovation of 55,820 fans as the stadium erupted with chants of “Hip Hip JORGE!” Behind Roger Clemens, the Yankees would go on to win 2-1, enabling themselves to claw their way back in a series in which they trailed 2-0.

My absolute favorite came in the postseason two years later, namely Posada’s game-tying two-run double off Pedro Martinez in Game Seven of the 2003 ALCS. It was a soft flare into center field that plated Bernie Williams (who windmilled his arm as he scored) and Hideki Matsui (who seemed to leap about six feet in the air after sliding into home) and culminated with Posada’s “Incredible Hulk” flex and roar, which capped a three-run eighth inning rally and chased Martinez to the showers at least one pitch too late. Posada’s burst of emotion was a cathartic moment shared by Yankee fans everywhere, creating an indelible memory that might just eclipse the game-winning homer Aaron Boone hit a couple of hours later. Perhaps that was because Boone was a transient Yankee, and Posada a lifer, or perhaps I had just downed a few too many beers by the point of the latter moment to produce pictures that retain the same vividness in my mind’s eye.

The other moment was one I didn’t actually lay eyes upon. Visiting Salt Lake City in September 2004, I found myself following the late innings of a game against the Orioles on ESPN’s GameDay service, watching pixels record every pitch of the game situation. With the score tied at 3-3 in the bottom of the ninth, the Yankees loaded the bases against Orioles closer Jorge Julio, via a Derek Jeter walk, a wild pitch, a Bernie Williams sacrifice bunt, and then intentional walks of Gary Sheffield and Alex Rodriguez. That brought Posada to the plate, and I turned to my brother and said, “Watch this, he’s going to draw a walk.”

I felt certain about this this because I had watched Posada draw walkoff walks in both 2002 and 2003, knew that his keen batting eye and excellent plate discipline made him an ideal hitter for the task at hand, one unlikely to force the issue by chasing a bad pitch. Posada fell behind 1-2, but as sure as God made little green apples, he waited for Julio to throw him a strike, and it never came. I had no idea if the pitch was high or low, inside or outside, but Posada was disciplined enough to avoid chasing and he brought home Jeter with the winning run. During his career with the Yankees, only four other players produced walkoff walks, none more than once.

As a fan, I saw Posada at his highest points. As a reporter, I saw him at one of his lowest, the day after he pulled himself from the lineup against the Red Sox last May and was left to apologize. The 39-year-old ex-catcher was mired in a slump at that point, hitting just .165/.272/.249 and failing to take to the designated hitter role after being forced from behind the plate due to concussion scares. The drama was ridiculous that day, but when Posada came to the plate as a pinch-hitter, he drew a lengthy ovation, one of many he would enjoy during his last lap around the baseball season.

From that point onward, Posada salvaged some respectability, hitting .268/.336/.421 the rest of the way, and even better against righties (more on that momentarily). He produced some memorable moments in the field, too — one in which he made his major league debut at his original position of second base, and sealed a 22-9 blowout win with a horrible throw that one-hopped and nearly pulled Nick Swisher off the bag, and the other in which he made a final cameo behind the plate when the Yankee catching corps was depleted, and nailed the first runner that tried to steal on him. 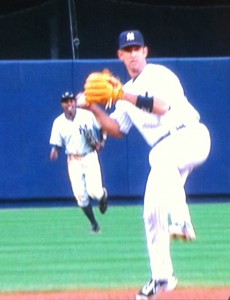 One highlight of Posada's 2011 was a cameo at second base, his original position when the Yankees first signed him.

I was in Yankee Stadium press box for Posada’s final game, a dispiriting Game Five loss to the Tigers in the 2011 AL Division Series. Throughout that series, he showed he still had life in his bat, hitting .429/.529/.571 in the series, and he collected two hits that night, including one with men on first and second where a less-than-mint Alex Rodriguez rounded third base but held up, and never scored. Though no fault of Posada’s, that unplated run loomed large, and the Yankees lost 3-2. As intent as I was on capturing Jim Leyland’s postgame quotes — I got a doozy when I asked him a question that moved him to tears — I never made it into the Yankee clubhouse, and so missed Posada himself tearing up at the though that he was done. I’m not all that sorry I missed that moment, as I had already seen him at his most vulnerable back in May, and I didn’t feel that much like wallowing in the morgue of an eliminated team, or risking losing control of my own emotions (I had a close call when Jeter collected his 3,000th hit).

Even though Posada had already announced his intention to retire, I made the case for his return last Friday at Baseball Prospectus, in a look at the Yankees’ DH options in the wake of the Jesus Montero trade:

The Long Goodbye Long Half of a Platoon To Be Named Later: Jorge Posada

The 40-year-old Posada recently stated his intention to retire, but that was before Montero was traded. While his overall numbers last year weren’t so hot (.235/.315/.398, for a .251 True Average), Posada did hit .269/.348/.466 with 14 homers in 316 PA against righties, and .294/.371/.474 after the Big Sitdown. If the desire to remain a Yankee were still there, he’d obviously have to accept a salary considerably less than the $13.1 million he made in each of the past four years. It makes a certain amount of sense, but Posada has since reiterated that he’s not coming back.

Now that he’s heading off into the sunset, the question is whether Posada is Cooperstown-bound. As a fan, I’d be delighted to see it, for I always thought Posada was tremendously underrated, a player who should have placed higher in the 2003 and 2007 MVP voting and earned down-ballot consideration in several other years. Of course, I’ve been tracking his Hall of Fame case for years. Back in February 2004, before JAWS had even been named (I had just debuted it at BP in January), I brought it up in a guest piece for Bronx Banter that also compared his place among Yankee catchers and contemporary Yankees. From time to time the subject has come up in the context of my BP columns and chats, of course, and I’ve addressed it here as well. Back in 2009, Jonah Keri, a former BP colleague and a big JAWS fan, essentially invited me into the discussion, and I responded thusly, with further correspondence from Jonah and Rob Neyer.

Though the underlying WARP metric has undergone considerable change since 2009, Posada’s position relative to the Hall standards at catcher hasn’t changed, which is to say that I fear he’s going to come up short, largely because of playing time. Though he played in parts of 17 seasons, he was a late bloomer whose 7,150 career plate appearances are far less than any of the post-World War II catchers in the Hall: Carlton Fisk (9,853), Gary Carter (9,019), Johnny Bench (8,669) and Yogi Berra (8,364), with Roy Campanella (4,816) an obvious exception due to the time he spent in the Negro Leagues. As such, Posada’s 275 homers and 1,664 hits don’t look like particularly impressive totals in the minds of the most reductionist voters, and he comes up a bit short in terms of JAWS. On that subject, I wrote a bit a couple of weeks ago:

Speaking of Willliams, the value of post-season performance, and the Yankee dynasty, over the weekend we learned that Jorge Posada will announce his retirement soon rather than search for a new team. Where Williams got a reasonably early start as a regular at 24, but was done as an effective player at age 33, Posada was a late bloomer who didn’t make the team as a backup until age 25, and didn’t start until age 26. He was still a marvelously productive hitter in his late 30s, hitting a combined .266/.360/.488 with 40 homers in 2009-2010. Among catchers with at least 7,000 plate appearances, he ranks fourth in OBP (.374) and sixth in SLG (.474), but that’s partly a function of era and ballpark. His .290 True Average is essentially on par with the average among Hall catchers (.292), a figure that’s as likely to come down due to Ivan Rodriguez (.265) as it is to rise due to Mike Piazza (.313) before Posada is too far along in his candidacy.

Posada (46.6/33.8/40.2) is closer to the JAWS standard at catcher (51.7/33.9/42.6) than Williams is in center, but his post-season line (.248/.358/.387 with 11 homers in 492 PA) isn’t uniformly great; he had some stellar series (.296/.367/.556 in the 2003 ALCS) and some poor ones (.158/.333/.211 in that year’s World Series). He finished higher in the MVP voting than Williams ever did—third in 2003, and sixth in 2007—and while he didn’t have Bernie’s Gold Gloves, FRAA doesn’t ding him particularly hard for defense (-0.1 by my spreadsheet, nine runs below the average Hall of Fame backstop). But catcher defense is difficult to measure, and it’s entirely possible that number will decrease between now and when he reaches the ballot if stuff like Mike Fast’s groundbreaking work is incorporated into WARP. However, one really can’t use it to make historical comparisons against players whose careers entirely predated PITCHf/x. As I’ve said several times over the years, Posada’s shot at Cooperstown depended upon him remaining productive throughout his contract and perhaps playing past 40, and alas, he did not. But like the similarly patient and tenacious Williams, the advantages he provided as a potent up-the-middle talent were significant, and they’re a reason so many world championship banners wave in the Bronx.

It would be nice if the BBWAA voters were to validate Posada’s career with a berth in Cooperstown, but those of us who watched him play know just how much he meant to the Yankees and their fans. Hip Hip Jorge will be greatly missed.