Friday
…to hit the convention’s highlight, a Seattle Pilots panel featuring Jim Bouton, Steve Hovley, Mike Marshall, and Jim Pagliaroni, and moderated by ESPN’s Jim Caple. Even with an ungodly early 9 AM start, the panel had the ballroom packed with a few hundred people ready to hear the story of Major League Baseball’s short-lived foray into the Emerald City and the reminiscences of these four iconoclasts. The Pilots, though they lost 98 games, survive in the popular memory due to Bouton’s classic diary Ball Four, a book named by the New York Public Library as one of the 100 most important of the 20th century; Caple told the crowd that even that distinction sells the book short. Bouton’s observations — about the ride from being a former star at the end of the four-decade Yankee dynasty to a fringe major leaguer barely hanging onto a job with a terrible team, learning the game’s most difficult pitch and living during a time of social upheaval — are of course the stuff of legend. The bawdy “tell some” tales of hard-drinking, skirt-chasing, greenie-popping athletes using four-letter words were seen as scandalous at the time, but today they’re revered for their candid glimpses into the lives and psyches of major league ballplayers. Caple drew one of the morning’s biggest laughs when he said that every time he reads the book, he understands at least one more sexual reference than the last time.

Bawdiness and four-letter education aside, the Pilots hold a special place in my life beyond Ball Four (which I first read when I was nine). I was born in Seattle in December 1969, so my mother was carrying me during their lone season. Until I moved to New York City in 1995, that’s the closest I got to living in a big league city. Kind of cool. 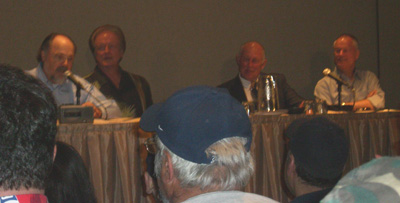 The panelists had the crowd in stitches for an hour and a half. Bouton described his Pilots teammates as characters out of a novel (quotes cribbed from the Seattle Post-Intelligencer):


“That was the beauty of the Pilots. They were older guys and every one of them was a great storyteller. Here they were playing together for the first time, getting to know each other through the exchange of stories.

“I caught lightning in a bottle. It was as if the baseball commissioner had put this team together thinking, ‘Hey, they might not win many games, but if anybody writes a book, it’ll be a hell of a story,'”

Such a viewpoint helped Bouton appreciate even old adversaries such as former Yankee teammate Fred Talbot. Particularly amusing was his re-telling of the Talbot home run incident (my favorite story from the book, and one I’ve had the fortune to hear him relate before in a command performance), in which the Pilots pitcher pounded a grand slam that won a lucky fan $25,000 (the amount seems to increase every time). Bouton and his teammates conspired to send a fake telegram offering Talbot a portion of the prize, with much hilarity ensuing.

Not everything Bouton said was rehashed; he also revealed that manager Joe Schultz’s catchphrase, “Pound that ol’ Budweiser” was rooted in the fact that Schultz had previously been a St. Louis Cardinals coach and thus, as an employee of Gussie Busch, owned stock in that particular brand. He brought the house down by singing verses of “Proud to be an Astro,” a ditty (written by Houston teammate Larry Dierker) which he learned after being traded late in the 1969 season.

Marshall made quite an impression as well. A pitching coach, former player representative, Ph. D in kinesiology, Cy Young winner, and the holder of the single-season record for relief appearances (108) and innings (206), he’s every bit the iconoclast that Bouton is, if not more. Marshall came off as particularly opinionated about today’s game, both with regards to player salaries (they should be dividing a bigger piece of the pie) and pitcher injuries (much more money should be going towards prevention, and of course his teaching methods would also prevent most of them). Marshall revealed that he and his teammates were aware of Bouton’s literary aspirations:

…”I’m proud of the book. I was proud of it when I first read it… You could write the same book about your co-workers… but who gives a damn?”

Hovley, a reserve outfielder on the team, had the least to say of any panelist, but he did explain what it was like to be identified as the team’s designated Dostoevski reader: “I was a jock in college, then I was an intellectual on a baseball team. I had all this free time and had a book in my hip pocket. It was not only noticed by my teammates, but immortalized in print.”

Pagliaroni discussed the difficulties of catching Bouton’s knuckleball, recalling Bob Uecker’s advice (wait until it stops rolling, then pick it up) and sharing memories not just of the Pilots but of his entire major league career. A Bonus Baby with the Red Sox, Pags was in the on-deck circle for Ted Williams’ home run in his final at-bat. “I dropped my bat and cried,” he told us. “I shook his hand as he crossed home plate.” Pags followed that with a single, according to Retrosheet.

Following the panel, Bouton sat to sign copies of his classic’s 2000 edition, Ball Four: the Final Pitch. I had the pleasure of meeting Bouton back when the book was released; later that night I ran into the woman who’s now my wife, a story I told here upon my engagement and which I related to Bouton when I had him sign Armour’s Rain Check article. Bouton seemed genuinely touched, and posed for a photo of me wearing my Pilots #56 throwback jersey (there were two other Pilots jerseys in the audience, one #21 for Tommy Harper, the other #2, which I think was for Schultz): 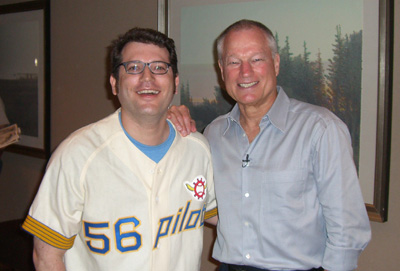 Bouton was also on the menu as the keynote speaker for the afternoon’s Awards Luncheon, but at $50 or $60 a ticket, I decided to forego the rubber chicken. I had planned to sneak in after the meal to hear the speech, but after grabbing a sandwich with a few other guys (Mike Carminati, Anthony Giacalone, Ben Jacobs, Chris Jaffe), I returned and quickly became involved in a heady discussion with Stu Shea and ESPN’s Gary Gillette, for whom I’d done some design work a couple years ago. Gillette and I chatted at length about the ailing Peter Gammons (later I scored a copy of Gammons’ out-of-print book, Beyond the Sixth Game), then I picked his brain about some of this year’s surprises, including the Tigers, Dodgers, and a handful of rookies. Somewhere amid the conversation, Pete Palmer — Gillette’s partner in compiling The ESPN Baseball Encyclopedia — dropped by, giving me the chance to meet and chat with a bona fide legend not just in the field of sabermetrics but in the dissemination of baseball statistics, period. A serious goosebump moment for me.

From outside the ballroom, I did catch the tail end of Bouton’s keynote speech, which sounded some of the same themes as his appearance on the Pilots panel, right down to another verse of “Proud to be an Astro.” Je ne regrette rien…

I spent much of the rest of the afternoon in the hotel bar, less to pound the ol’ Budweiser than to get acquainted with my new BP cohorts, Maury Brown. and Dan Fox. Dan told me of his work datacasting Rockies games for MLB.com’s Gameday. Maury was working on a piece about the esoterica found in player contracts. We kicked that topic around, talked about the SABR Business of Baseball committee he co-chairs (along with Gary Gillette), and discussed rumors of new steroid-related revelations. We also shared a good laugh about some correspondence he’d had with Stan Kasten. The Nationals’ president, whom he interviewed recently, solicited him in search of a sabermetrically-minded underling for GM Jim Bowden, who is miraculously going to keep his job, and apparently needs all the help he can get. Insert punchline here.

Around 5:30, most of the conventioners either headed out to catch a bus to the Mariners/Rockies game at Safeco Field or to walk (all of about a mile) to the field; I lingered another half-hour in the lobby, waiting for Bryan, my brother, to join me, then we strode down there as well. This was to be my first game at Safeco, and my 10th major-league stadium overall (Yankee, Shea, Fenway, Tiger, Wrigley, Jacobs Field, Camden Yards, Miller Park, and RFK are the others, with Dodger Stadium on deck next weekend). Arriving at the ballpark, we bumped in to Dave Eskenazi, whose memorabilia we’d soon be admiring on the ballpark’s murals. Bryan and I scouted out potential food options, settling on Porter’s BBQ on the 100 level. I got a tall beer and something called the Porter Special — a hot link covered with a huge pile of pork — then gingerly ascended to my seat in the upper deck, praying that I wouldn’t spill anything on my Pilots jersey. 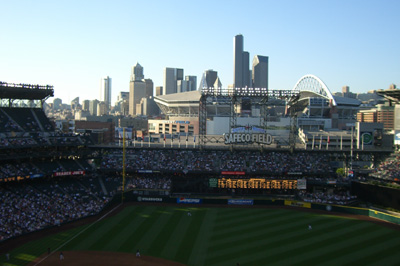 We joined Stu Shea, Cecilia Tan and their s.o.’s (Cecilia and Corwin, respectively) up in section 320, row 19, high up on the first base side, and I quickly removed the jersey and immersed myself in meat. I’m not sure I really attempted to follow the game until about the third inning; no scorekeeping for me, as I forgot my scorebook in New York City, but the only tally that really mattered — besides the out-of-town scores which Bryan filled us in on via info culled from his Blackberry — was no sauce on the retro jersey. In any event, the third frame arrived rapidly. Neither the Rox nor the M’s seemed intent on taking many pitches, and both Josh Fogg and Jamie Moyer mowed through the opposing lineups in short order, relying mainly on their changeups.

The Rockies finally broke through in the fifth inning, when Moyer yielded a leadoff walk to Brad Hawpe, who advanced to second on a sacrifice and to third on a groundout, then scored on a single by Jamey Carroll. Hawpe belted a solo homer to centerfield in the seventh, and that was it for the scoring. Fogg went the distance with a shutout, tossing just 91 pitches while facing the minimum number of Mariner hitters; the two hits and one walk he yielded were erased via double plays, and the game was over in an astounding 1:52 — the shortest contest in Safeco history. Cecilia and I joked about the fact that we’d seen Yankees-Orioles games which lasted twice as long.

Though it was barely 9 PM as the game wrapped up, my SABR day was done; I needed to rendezvous with Andra (my wife), who was flying in from New York. Bud would have to be pounded elsewhere… to be continued