Slowly but surely, I’m settling into my new apartment in Brooklyn, but I’ve yet to unpack many of my baseball books or knickknacks, including my collection of about 20 bobbleheads. Among those is a special one I’ve been meaning to write about for over six months. 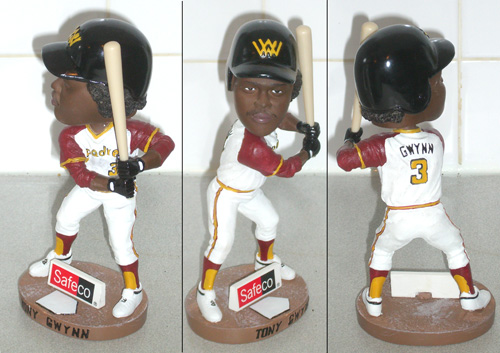 In the summer of 2006, in anticipation of Tony Gwynn’s induction to the Hall of Fame the following year, an employee of the Everett AquaSox of the Northwest League contacted me about a plan to commemorate Gwynn’s career with a bobblehead doll. Gwynn never actually played for Everett, but that franchise is the transplanted successor to the Walla Walla Padres club my grandfather took my brother and me to see back in the late Seventies and early Eighties.

By the time I found him playing for Walla Walla in 1981, Gwynn was already a familiar face to me. I’d seen him play basketball for San Diego State University against my hometown University of Utah as part of the annual Western Athletic Conference schedule. Gwynn was the Aztecs’ starting point guard (!), and he was a good one, setting school records for assists that still stand and earning all-WAC honors twice. Though he was a late-round pick by the NBA’s Clippers, by that point it was clear that baseball was Gwynn’s ticket to professional stardom. The Padres chose him in the third round of the 1981 draft and sent him to Walla Walla to start his pro career. He wasn’t long for the Northwest League, but he was still there when my brother and I visited our grandparents. He hit .331/.406/.612 with 12 homers and 17 steals in just 42 games before being promoted to Double-A Amarillo, where he hit .462 in 90 at-bats. By the end of the next season, he was a San Diego Padre, and he was still a Padre 3,141 hits later when he retired in 2001.

Anyway, the AquaSox employee had discovered via Google that I’d written about seeing Gwynn, and wrote to ask whether I had any pictures that they could use to find out his uniform number and other details. Though lacking a picture of Gwynn, or any color photos at all, I dig up his number (#3) off an old roster that also lists future major leaguers John Kruk and Greg Booker. Via a bit of supersleuthing though a couple of old programs and a copy of Mark Okkkonen’s Baseball Uniforms of the 20th Century (a database of which is now online via the Hall of Fame) I discovered that the 1981 Walla Walla team wore the 1979 big club’s uniforms. Handing down uniforms to the low minors clubs was still common in those days, and the position of the numbers on the front of the uniform and the piping around “Padres” enabled me to deduce the uniform in question.

As for the finished result of the Gwynn doll, the browns are a bit more reddish than I would have liked to see, but for a run of 1,000 that was apparently hand-detailed, it’s not too shabby. Good enough for me to add the title of “Bobblehead Consultant” next to “Sausage Race contestant” on my long and distinguished resume, and good enough for the Gwynn doll to sit next to the Tommy John Bobble-Arm (if not that elusive Jason Tyner) on my mantle.

Now, when are they going to make the damn Luis Sojo bobblehead?