As a general rule, I avoid overt political content in this space. I started writing about baseball to escape writing about politics and the long-running culture war, and with a few exceptions, I’ve stuck to that. I might fundamentally disagree with readers on matters far more important than baseball, but I enjoy finding common ground on at least one topic, and I prefer not to alienate them once we’ve found that ground. Further more, I don’t enjoy writing while angry, and for most of the last eight years, we’ve had A LOT to be angry about.

At last, our long national nightmare of criminally stupid wingnut rule is (nearly) over thanks to the election of Barack Obama as the first Democratic president since 1992 and the first African-American president in U.S. history. What an awesome, momentous day for America. I am damn near beyond words when it comes to describing how proud I am to have been part of it as a citizen and a voter.

At last, we can move past this confederacy of dunces unbound by the rule of law. At last we have a leader that Americans and the rest of the world can respect, a man who inspires hope instead of preying upon fear, a man capable of advancing the fulfillment of this country’s promise.

I won’t belabor the point beyond that except to note that my old nemesis on MSNBC’s Connected Coast to Coast panel for the Congressional hearings on steroids in baseball, Representative Christopher Shays (R-CT) was put out of a job on election day. A blowhard who didn’t know anything about anything when it came to the issue at hand, Shays was so stupefying that I took on the look of a sedated toad while listening to his blathering: 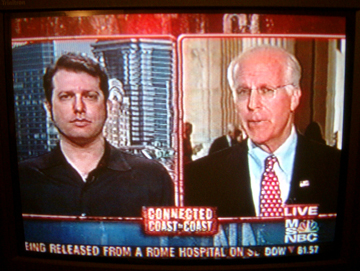 I broke that look out at an election night party for old times’ sake and cracked up an entire room. Thank you, Mr. Shays, for adding to the mirth.

Unlike host Chris Villani (who produced the station’s election-night coverage), I did answer the morning bell for today’s WWZN-Boston “Young Guns” appearance. My head and stomach were in rough shape from too many Obamartinis and too much champagne, but ragging on Jason Varitek is always worth getting out of bed for. Listen here.