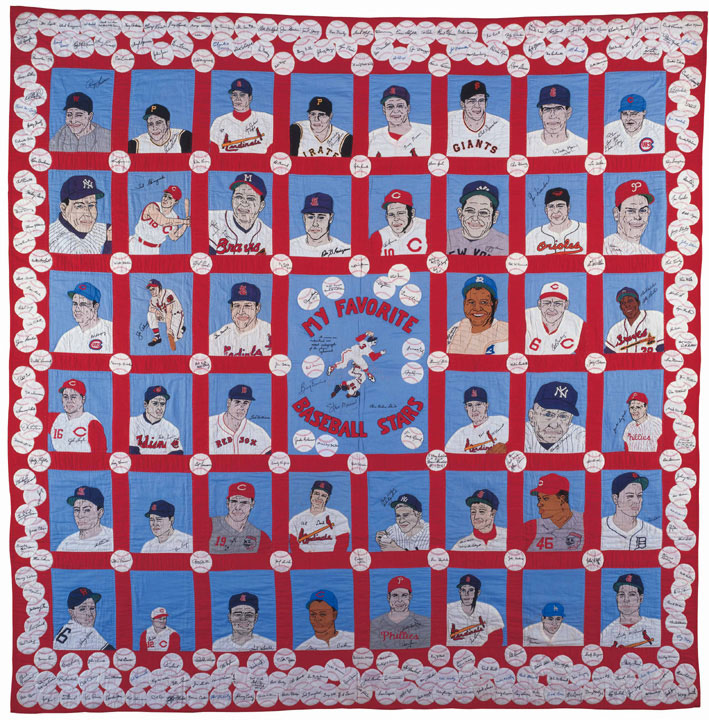 I’ve never attended a perfect game, but back in the summer of 2003, I attended “A Perfect Game,” an exhibit at the American Folk Art Museum devoted to baseball. I was so taken with it that I wrote a lengthy review, which included this bit about the image above:


One of the most prominent pieces of the exhibit is a 7′ x7′ quilt called “My Favorite Baseball Stars,” created by Clara Schmitt Rothmeier, the daughter of a minor league ballplayer. (This photo of the quilt and the other photos I link to for this article were generously provided by Susan Flamm of the AFAM for the purposes of this review). Over a ten-year period from the mid-Fifties to the mid-Sixties, Rothmeier drew pictures of her favorite players, traced them onto fabric, appliquéd and embroidered each one, then sent them to the players for their autographs. Once a panel was returned, she would add it to her quilt, embroidering the signature as well. Midway into the project, she added a border of cloth baseballs, each featuring another signature that she’d collected. The finished quilt contains forty-four panels and about three hundred autographed balls. There are some heavy hitters among those portrayed: Ted Williams, Stan Musial, Yogi Berra, Roy Campanella, Casey Stengel, Mickey Mantle, Whitey Ford, Robin Roberts, Al Kaline, and a sleeveless Ted Kluszewski. Among the signed and embroidered balls are even more legends: Ty Cobb, Tris Speaker, Jimmie Foxx, Frankie Frisch, Dizzy Dean, Joe DiMaggio, Jackie Robinson, Satchel Paige, “Cool Papa” Bell, Bob Gibson, and Sandy Koufax. Yeah, some of those guys could play ball.

Born in 1931, hailing from Gerald, Missouri, Rothmeier was certainly no stranger to the diamond. From her bio in the exhibit catalog, The Perfect Game:


Rothmeier was an accomplished baseball player as well as a quiltmaker. Her father played minor league ball in the Pittsburgh organization, and her five brothers and four sisters had all played on traveling baseball and softball teams. Rothmeier herself played first base for a traveling softball team from Springfield, Illinois. While on the road, she started sewing to keep busy. Her “favorite stars” quilt took more than 10 years to complete. She has also made quilts commemorating the 1951 and 1956 St. Louis Cardinals (her favorite club), the major league teams of 1948, and Jackie Robinson’s 1955 World Champion Dodgers.

Last night, I received an email from a woman named Elizabeth Hixson informing me that Rothmeier, her great aunt, had passed away this week due to cancer. “She was a great artist [and] she was a great person,” wrote Hixson.

My deepest condolences to Rothmeier’s family and friends.