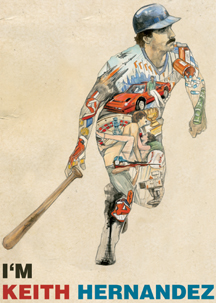 As something considerably less than the world’s biggest Keith Hernandez fan, I certainly didn’t expect to find myself watching and enjoying Rob Perri’s just-under-20-minute short film, “I’m Keith Hernandez” — at least until I read the synopsis at the website:

By examining the aforementioned types of media in conjunction with Lacan’s “Mirror Theory”, a clearer picture of masculinity emerges. As part of this discourse, the physical attribute of the mustache is explored as a symbol of male virility. Other topics include the Iran/Contra Affair and the resulting “Crack Explosion”, celebrity obsessed culture, and the subtleties of children’s television programming.

Narrated in an innuendo-laden tone reminiscent of VH1’s Behind the Music exposés and occasionally making the type of narrative and editing leaps I associate with Craig Baldwin’s wacko pseudo-documentary Tribulation 99: Alien Anomalies Under America, the film simultaneously celebrates and eviscerates the cheesy mustache man, the image he projects, and the dark period where narcotics made their way into the national pastime. Here’s the narration from one of my favorite parts:


Hernandez would also offer guidance to fellow New York first baseman Don Mattingly by telling him about the secret power of the mustache.

Keith explained to Mattingly that with the recent success of Magnum P.I., it would be foolish not to capitalize on the possibility of being attractive by association. And after taking Hernandez’s advice, Mattingly certainly bagged more babes, but he also bagged more bases. In 1984 he won the American League batting crown…