What a night for the Yankees! It wasn’t pretty, but they managed to turn nine singles, nine walks, two errors, an anxious extra day of waiting due to weather, a sterling 6.1 inning effort from Andy Pettitte and a six-out save from Mariano Rivera into their fourth win over the Angels in the American League Championship Series, and their 40th pennant in history. They got the (Rally) Monkey off their backs, beating the Angels for the first time in three playoff meetings and chasing away some of the ghosts from 2004, the last time they held a 3-2 lead in the ALCS.

I had the pleasure of viewing the festivities from Section 406 in high right field: 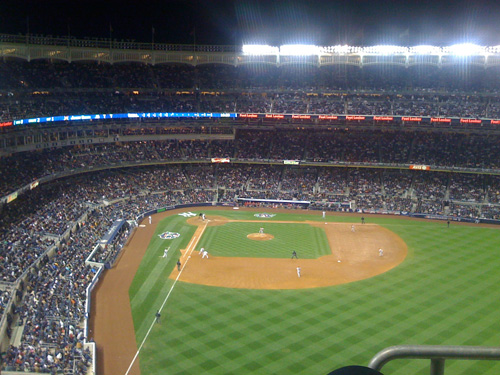 After the previous night’s rain and the previous weekend’s chill, the weather was incredibly cooperative, with the game-time temperature announced as 58 degrees. I know this because we were one section over from the auxiliary press box, where a special PA feed fed the writers a stream of tidbits (“Alex Rodriguez now has an 11-game postseason hitting streak,” etc.).

Pettitte came out firing, getting ahead of the Angels’ hitters in the first inning and striking out Bobby Abreu, but the former Yankee gave the Halos the lead in the third inning with a two-out RBI single to capitalize on a Jeff Mathis double. Meabnwhile, the Yankees had their opportunities to score early against Angels starter Joe Saunders, leaving two men on base in the first, three in the second, and one in the third.

They broke through in the fourth inning, which Robinson Cano led off with a walk — the first time the Yanks had gotten the leadoff hitter aboard thus far. Nick Swisher broke out of an 0-for-12 slump with a single, Melky Cabrera laid down a sacrifice bunt, and Derek Jeter walked to load the bases with just one out. Damon, who’d grounded out weakly with the bases loaded to end the second, this time delivered with a two-run single up the middle. Mark Teixeira reached on an infield single to shortstop Erick Aybar that should have been a double-play ball.

Facing Alex Rodriguez with the bases loaded was something Saunders clearly wanted no part of. Saunders issued a five-pitch walk which scored the Yanks’ third run and spelled the end of his brief night. His line: 3.1 7 3 3 5 0. It might have been worse had reliever Darren Oliver not gotten Jorge Posada to ground into an inning-ending double play.

With the Yankees holding a 3-1 lead, I started counting down the outs, at least in my head, working backwards from Mariano Rivera through the suddenly shaky setup corps and back to Pettitte. Fortunately, Andy was dandy, throwing first-pitch strikes to 20 of the 25 hitters he faced, whiffing six while allowing just one walk. He had retired nine in a row before the Angels mounted their biggest threat of the night in the sixth, when Torii Hunter reached on an infield single and Vlad Guerrero blooped a double down the right field line. The Angels looked poised to tie the game when Kendry Morales smoked a ball up the middle, but Pettitte knocked down the hot smash and calmly threw to first for the third out. Money.

He departed to a thunderous ovation with one out and one on in the seventh, with Joba Chamberlain coming on. Chamberlain offered little of his usual drama in either the positive or negative sense — no fist-pumping strikeouts, no well-hit balls following ineffectual nibbling around the plate. He kept the ball in the infield and got two grounders, one a fielder’s choice (via a puzzling move by Angels manager Mike Scioscia to pinch-hit for the red-hot Jeff Mathis with infielder Maicer Izturis) and the other on a grounder to Derek Jeter.

With six outs to go, Yankees manager Joe Girardi decided to dispense with all further middling middlemen and go for the kill, summoning Mariano Rivera. My friend Nick, who’d been wearing his Lou Gehrig pinstriped replica jersey, stripped down to a navy blue Rivera t-shirt which dates back at least one pennant ago. It was a bold move that almost backfired — Girardi’s, not Nick’s — as the Angels scraped out a run in the eighth on a pair of singles and a groundout, cutting the lead in half while forcing Rivera to throw 21 pitches.

Luckily, the Yankees reclaimed some breathing room. Cano worked another leadoff walk, and then the Angel botched consecutive sacrifice bunts, with Howie Kendrick failing to handle the throw at first base on the first one (Swisher’s) and then reliever Scott Kazmir (!) shot-putting the second one (Cabrera’s) into foul territory right field as Cano scampered home. One out later, Damon walked to load the bases, and then Teixeira delivered a sacrifice fly to plate the Yankees’ fifth and final run.

At this point the crowd — 50,173 strong with hardly an empty seat in sight — was in a total frenzy, on their feet for the entire ninth. Rivera made it look easy for the first two hitters, quickly retiring Kendrick on a grounder to Teixeira, then inducing Juan Rivera to fly out softly to right. Pinch-hitter Gary Matthews Jr., another puzzler from Scioscia, battled Rivera to a full count before Rivera snuck his trademark cutter — a bit high and outside — by him for strike three and the AL pennant. He calmly walked halfway to the plate to hug Posada, then ran to leap onto the dogpile forming near shortstop:

So now the Yankees have inaugurated each of the three editions of Yankee Stadium with a pennant. After all the extraneous drama the new ballpark wrought, it felt strange to be celebrating in that space. The crowd was cheerful but maybe a bit reserved, dispersing rather rapidly compared to the way they lingered at the 1999 World Series clincher, the most momentous occasion I’ve had the pleasure of attending at any ballpark. Back then the upper deck shook for 90 minutes, and 56,782 fans dogpiled on each other after the final out, singing “New York, New York” and “We Are the Champions” in unison as we watched the players celebrate on the field.

Okay, that’s a nearly impossible standard to uphold. I don’t think it’s because Yankees fans take such a victory for granted, not with a six-year pennant drought, but because they/we know there’s bigger game to hunt. Unlike in the old ballpark, it was a genuine breeze to exit even amid the celebration, and it was cool to get a glimpse of the players’ champagne-soaked locker-room celebration in the Great Hall: 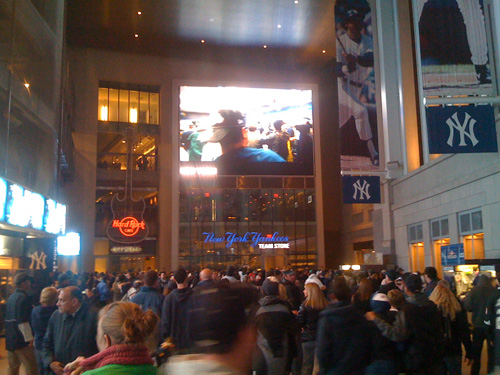 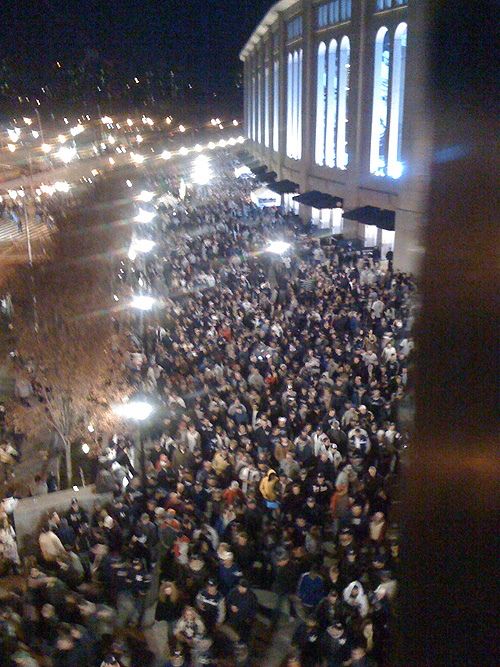 As the Yankees received their championship trophy, an official photographer even snapped our pictures (yes, I’m too cheap to pay for a non-watermarked version, but that flash flatters no one): 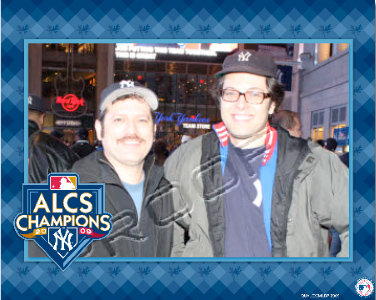 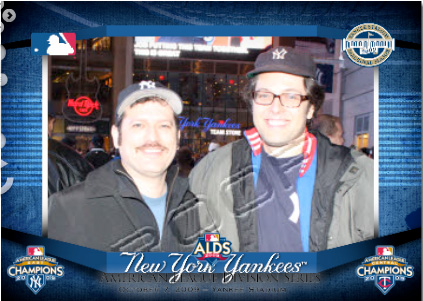 That’s a couple of happy campers who enjoyed a pretty great night at the ballpark. Bring on the Phillies!