Alex Belth, Cliff Corcoran and I cut a snappy two-part video series for SNY.tv’s “Bronx Banter Breakdown” today. Part one is up at Bronx Banter, and in HD at SNY.tv. 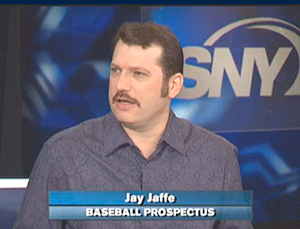 One correction to an assertion I made within this video: Pedro Martinez has one postseason start on three days’ rest, in the 1999 AL Division Series opener against the Indians. He left after four innings due to a back strain, then famously returned four days later to pitch six hitless innings of relief to close out the series in Game Five.

Regardless, he ain’t going on three in this series.