What happens when a baseball outsider lands what seemed to be the job of her (yes, her) dreams, covering the two New York baseball teams as a beat reporter? What happens when that job is just as suddenly yanked away when her publisher goes through yet another regime change? Having crossed the line into professionalism, can she go back to enjoying the game as a fan? Those are a few of the big questions at the center of Emma Span’s new book, 90% of the Game is Half Mental, a quasi-memoir which serves as an engaging meditation on the nature of fandom in this media-saturated age — and more importantly, makes for a thoroughly enjoyable debut. 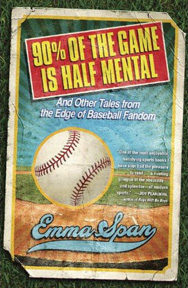 A native of suburban New Jersey who grew up a Yankees fan and came of age early in the Torre dynasty, Emma’s currently a regular Bronx Banter contributor as well as the occasional keeper of her own well-named blog, Eephus Pitch (disclosure: I have been known to quaff the odd beer and/or attend the occasional ballgame with Ms. Span and am pleased to report she is delightful company for either endeavor. Also, I am partial to books which borrow their titles from Yogi Berra aphorisms).

As with most fans, male or female, working inside the game was hardly her first calling. As her story goes, after majoring in film studies at Yale, Emma faced the harsh reality of a liberal arts education that could take her only so far, in this case to a dead-end job writing blurbs for dubious direct-to-video titles like Titaboobs Paradise and Stanley the Stinkbug Goes to Camp. Her adventures inside the game began when she caught a break and had the opportunity to cover the 2006 Mets’ playoff run for the Village Voice, a venerable alternative weekly rarely known for its sports coverage even as it’s gone more mainstream (though Allen Barra heyday for Jockbeat was notably worthwhile). Her run at the Voice was brief — she was laid off after returning from a two-week trip to Florida to cover spring training the following year — but nonetheless long enough to confront the necessity of cultivating a sense of professional detachment from her rooting interests. Along the way she gathered some keen and often hilarious insights into working behind the scenes. Particularly notable is her jaundiced take on Shea Stadium and her introduction to the locker room etiquette of being a female sportswriter — segments of which put a recent Varsity Letters audience in stitches:


I don’t really want to pile on Shea, because there’s a long line. I heard at least seven or eight different sportswriters experess their eagerness to be the one pushing the plunger when demolition day finally came. (They were all disappointed, as Shea was reduced to rubble slowly and in pieces). But also because, in this age of cookie-cuter nostalgia-fest stadiums, I grudgingly admired Shea’s unique ugliness. The place had character — sort of a disagreeable character, but character — and that ought to be worth something. It was a reminder of changing times; Shea was completed less than fifty years ago, in 1964, yet it is now impossible to imagine a scenario in which anyone could look at those blueprints and think, Good idea.

… On my first day I’d been in the clubhouse less than an hour when Pedro Martinez walked in and started changing by his locker. I wanted to go over and talk to him — ask him a question if I could get up the nerve, or at least listen in to a group session. But I figured I would wait until he got some pants on. It seemed lie the polite thing to do, probably the course of action Emily Post would suggest.

I shifted my weight from one leg to the other and fiddled with my pen; Pedro gave interviews cheerfully and joked with his teammates in Spanish. I glanced over super-briefly, so as not to get too good a look at anything, every few minutes. Pedro really not in a hurry to put on his pants, reads an exasperated scrawl in my notebook from a good twenty minutes later, really underlined three times. Eventually he wandered into the trainer’s room, pants still nowhere in evidence.

After being laid off, Emma turned her energy towards a book project covering the Yankees’ and Mets’ 2007 seasons in the hope that they would culminate in a Subway Series. Her travels took her well beyond New York, most notably to Milwaukee in the hopes of witnessing Tom Glavine’s 300th win as well as the famous sausage race (a topic on which I can claim expertise), and to Taiwan to investigate the state of its professional baseball league as well as the iconic status of Chien-Ming Wang, and the accompanying rabidity of the Yankees’ following. Alas, while the Bronx Bombers made the playoffs for the umpteenth straight time (only to eventually be doused by a swarm of midges), the Mets’ campaign ended when Glavine crashed and burned on the season’s final day.

Emma’s plans for that book evolved into 90%, and while the effort to repurpose her tales into a first-person case study on the nature of fandom could have just as easily gone down in flames as that fateful Glavine start, it doesn’t. She’s a sharp, quick-witted observer with a facility for extrapolating from her own experiences into a more general contemplation of the silly and serious investments we make as fans, often with engaging amounts of self-deprecating humor. She’s clear-eyed about the Yankees’ excesses, sympathetic to the Mets’ inferiority complex, and willing to play both sides of the fence even at the risk of committing baseball polyandry.

As a woman writing about a game played — and largely covered, and followed — by men (or perhaps more accurately, overgrown boys), Emma inevitably confronts the gender divide at several turns, but her light touch ensures that the topic hardly wears out its welcome. Nowhere does she wind up needing to apologize for any deficit of understanding on account of her femininity; she doesn’t cower in fear of scorecards or Baseball Prospectus’ advanced metrics, nor does she turn into Ballgame Barbie, more concerned with fashion sense and celebrity gossip than batting orders. Yet she doesn’t strain to be one of the boys, either. Instead she simply turns her unique perspective into an asset, emerging with a work that’s tough to put down until you’ve sailed through its 166 pages. Male or female, if you’ve had the chance to read her work at Bronx Banter, the Voice, or her own site, you know this already. If not, you’re in for a treat.