So this past Sunday I got up to Yankee Stadium for my first game of the season, where my friend Julie and I watched Dandy Andy Pettitte and the Yankees subdue the Rangers, 5-2. Given last year’s ugly ticket drama, I’m pleased to report that we’ve moved up in the world.

Last year, we were about four rows from Newark up in section 413 just beyond the infield down the right field line: 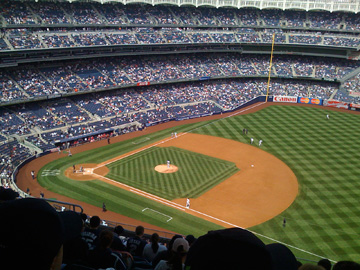 This year, we’re in the front row of section 422, much closer to the plate: 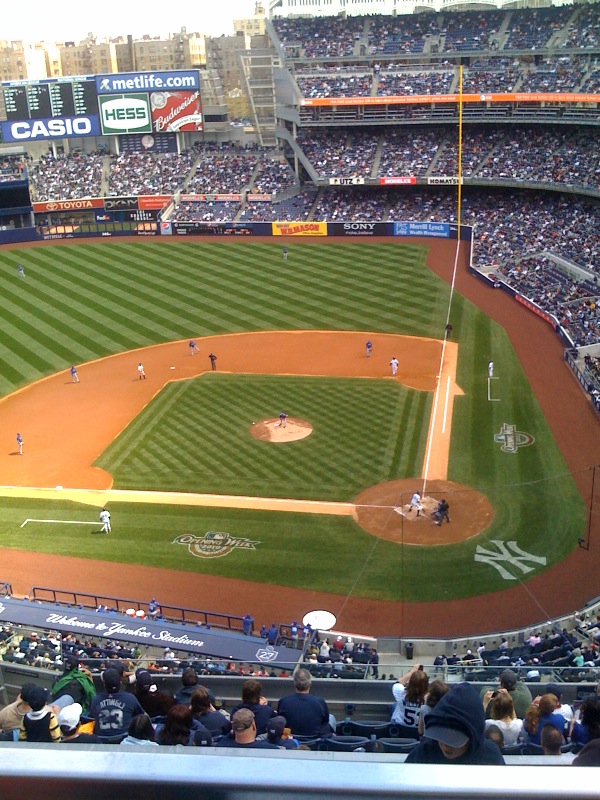 These are much more comparable to our seats in the old stadium, albeit an estimated 30 feet back and 30 feet higher: 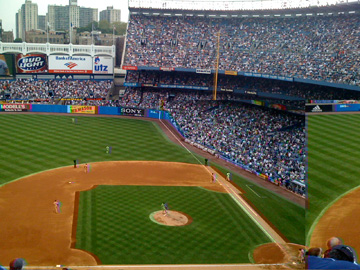 Best of all, the seats are just $25 a pop on our plan, up a reasonable $5 from last year and still less than half of what we paid in 2008. That’s a huge win, and while it doesn’t completely replace the bitter taste in my mouth over the way we were treated last winter, it’s only fair to acknowledge that things have improved, and that my friends and I are happier for it.

• On Wednesday I wrote about the Red Sox on the heels of their five-game losing streak, which they shook off even as I was finishing the thing. The biggest deal about their situation isn’t their pitching or their defense, it’s David Ortiz:

Most of the handwringing regarding the Sox’s slow start boils down to concern about Ortiz, who’s in the final year of a four-year, $52 million deal. It took just two games and seven futile at-bats before the calls for his benching began, and at this writing he’s now 6-for-41 with 17 strikeouts and zero homers; last night he was pulled in favor of Mike Lowell to face lefty Darren Oliver with two on and two out in the seventh inning, the Sox down by two. That the 34-year-old slugger is in decline isn’t exactly up for debate:

As bad as that progression looks, the last line conceals the drastic split between the first couple months of his season (.185/.284/.287 with a lone homer in 208 PA through May 31), and the rest (.264/.356/.548 with 27 homers in 419 PA). Which isn’t to say that it’s only a matter of time before Ortiz’s 2007 form comes around again; two years of wrist woes as well as the general aging process applied to a bulky sloth with a history of knee problems should see to that. PECOTA isn’t entirely down on Ortiz, forecasting a .274/.368/.514 weighted mean projection, but even so, those aren’t the numbers of a lineup centerpiece anymore.

The real issue isn’t his slow starts so much as it’s his performance against lefties:

Always fun to see Boston down, but I don’t think they’re going to stay down for long — there’s too much talent and too many resources there, though the catching situation is also a concern given that Victor Martinez and Jason Varitek have only thrown out about 11 percent of base thieves over the past year-plus; the Rangers ran riot on V-Mart, stealing nine bases on Tuesday night.

• The NL Hit List features Chickens for Checkups and endless dry-humping (the term for what the Mets’ idiot savant manager Jerry Manuel did by warming up closer Francisco Rodriguez nine times during the team’s 20-inning win on Saturday).

• If you follow my Twitter stream, you’ve already heard my blue-streaked mea culpa regarding Phil Hughes’ no-hit bid on Wednesday night. The sanitized version is as follows. I was out with my friend Nick at Beauty Bar in the East Village, preparing to call it a night after a few beers, when I checked the Yanks-A’s score on my iPhone. I saw that through seven innings, Hughes had a no-hitter going, so we bolted out of the bar (which doesn’t have a television) in search of one that did. We passed a sports bar with a big Yankee logo, but every TV we could see in there had basketball or nature shows on, so we peered into the next bar down Second Avenue. By the time we’d sat down with our beers, I realized it was a Red Sox-flavored bar, the notorious Professor Thom’s, which everybody in the Twitscape seemed aware of but me. One pitch later, Hughes’ no-no was no mo’. From the AL Hit List , which is topped by the Bronx Bombers:

[#1 Yankees] Philthy: Phil Hughes becomes the second Yankees pitcher this season to take a no-hitter into the eighth, but he’s jinxed by a bum who stumbles into the wrong bar, fails to locate a comebacker, and settles for a 7 1 1 1 2 10 line. At least he emerges in one piece, unlike his last no-hit bid three (!) years ago. The Yanks’ rotation is firing on nearly every cylinder, though Javy Vazquez’s 8.27 ERA is nearly as high as the other four pitchers’ marks added together (8.91). Meanwhile, the team’s equivalent of Halley’s Comet comes around, as they pull off their first triple play in 42 years.

In addition to being Philthy, the Hit List is Trembley, Slowey, Javy, Brantley and totally Lackey. Also Smoaky.

• One final note: on May 1, Blogger will stop FTP publishing, the means by which this blog is published so as to reside on the same server as the rest of my site while emulating its look and feel. I am investigating a move to the WordPress platform, and at some point am going to need to provide some instructions (a new URL, likely) as to how to find FI. If for some reason this blog is offline for any length of time, know that it will be back soon enough and that I’ll see you on the other side.