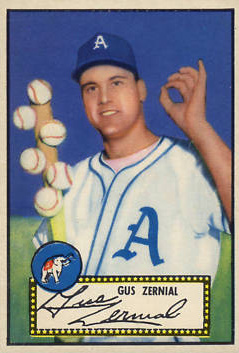 Former major league outfielder Gus Zernial passed away on Thursday at the age of 87. A World War II veteran, he didn’t debut in the majors until he was nearly 26, but he enjoyed an 11-year career with the White Sox, A’s and Tigers, earning All-Star honors once and leading the AL in homers and RBI in 1951. Nicknamed “Ozark Ike” after a popular comic strip character and billed as “the New Joe DiMaggio,” he was something less than that as a complete ballplayer, but he was a genuine thumper, placing in the top five in the AL in dingers five other times from 1950-1957, and ranking sixth on the leaderboard during that span, surrounded by Hall of Famers:

For a long time Zernial held the distinction of hitting the most homers for a player whose last name ends in the letter Z with 237, but Todd Zeile passed him in 2003 while playing for the Yankees, hitting a homer off the Red Sox Bruce Chen. In 1951, Zernial and Al Zarilla did team up to form the first outfield with two players with the last name starting with Z, so there’s still that.

I’m too young to have seen Zernial play, but I’ll always remember him for the oddity of the above card, which came to my attention via one of my all-time favorites, The Great American Baseball Card Flipping, Trading, and Bubble Gum Book by Brendan C. Boyd and Fred Harris. Here’s the entry for Zernial’s 1952 Topps card:

This is one of my all-time favorite cards. How do you suppose they got those baseballs to stay up there anyway? Nails? Scotch tape? Postage stamp hinges?

And why do you think Gus is giving us the high sign? Is he trying to assure us that everything is OK? Is he trying to indicate to us that he thinks the Athletics are a big zero? Does he want a cinnamon doughnut to go?

And why is he wearing a pink undershirt?

And what the hell is it all supposed to mean anyway?

The back of the card sheds very little light on the situation. In fact, other than telling us that Gus was a radio mechanic in the Navy during the war it is not particularly informative on any matter whatsoever.

Gus Zernial was a member of that band of bulky, slow-moving, power-hitting outfielders who made their way into the majors shortly after the end of the war. It included among its number Roy Sievers, Clyde Vollmer, Irv Noren, Elmer Valo, and Gil Coan. Of these, Gus Zernial was the best. He was also the bulkiest.

Hey Gus, do you know where I can pick up on a pink T-shirt?