One reason I wanted to fire up this old blog again is to expound upon my passion for craft beer at greater length than Twitter or Untappd allow. Which isn’t to say that I’m anywhere close being to the most articulate person when it comes to discussing brews, but given a broad range of tastes — I love the dark stuff, even in summertime, but also dig the big IPAs, and am slowly getting more into saisons — and an audience that has interest in them, I’m happy to put a bit more effort into improving on that front.

As I noted upon relaunching, for the past couple of years I’ve done a “Beer of the Week” spot with ESPN El Paso radio host Steve Kaplowitz at the end of our weekly baseball spots. Sadly, neither of us thought to keep a record of my picks, but now I’ve resolved do that, and this will be my vehicle for doing so.

Earlier this month, Steve had me down to El Paso for the Sun City On Tap craft beer festival, at which I sampled 17 different beers, focusing on those I had never tried before. Six of them really stood out: Boulevard 80-Acre Hoppy Wheat and Tasting Room Oatmeal Stout, Deschutes Black Butte XXVI Imperial Porter and Fresh Squeezed IPA, Great Divide Oak Aged Yeti and Odell 90 Schilling. Steve also took me to Specs, an alcohol wonderland that offered bottles of brands I can’t obtain in Brooklyn, and I set a personal record by hauling back four big bottles (750 mL or 22-ounce bombers) and eight 12-ouncers in my suitcase — keeping my unbroken streak unbroken but getting a slip from TSA that indicated they had gotten all up in my business of underwear-wrapped beer bottles*: 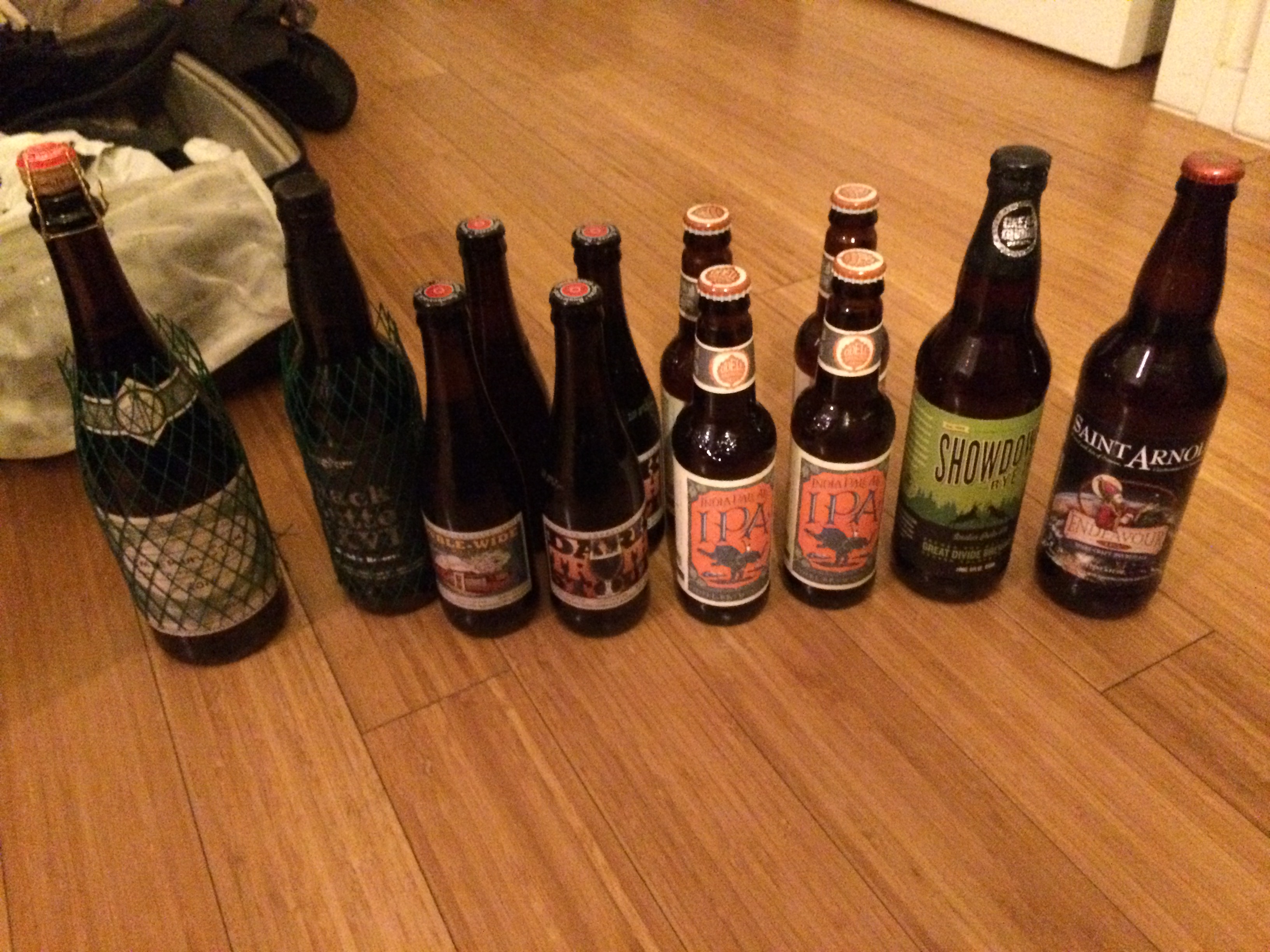 That last one was my Beer of the Week for our January 21 spot. While I’ve been exposed to excellent beers from a handful of Colorado breweries— Great Divide, Left Hand, Avery, Oskar Blues — I hadn’t even heard of Odell Brewing Company, which is based in Fort Collins and doesn’t appear to distribute anywhere east of the Mississippi River. At Specs, I was drawn first to their packaging and their proliferation of styles, and after looking them up on Beer Advocate, I noticed that their IPA gets a 95 rating from the BA crowd and a 100 from the Alstroms. Sold.**

I wasn’t disappointed. This one was a beautiful combination of citrus (orange rind came to mind) and pine aromas, with a heavy but not overwhelming hop presence and a pleasantly malty backbone. While a bit of research tells me they use Simcoe, Amarillo, Chinook, Cascade, Columbus, Perle and Centennial hops, this is hardly a hop bomb that will annihilate your taste buds. Though it’s 7.0% ABV, it doesn’t come off as particularly heavy in alcohol — it’s very smooth. If they sold it in my neighborhood, I’d put this one in my regular rotation in a heartbeat.

As noted above, I was also impressed by their 90 Schilling Ale, the flagship brew with which they launched their endeavor back in 1989. It’s an amber that’s considerably lighter in alcohol (5.3% ABV) and bitterness (27 IBU to the IPA’s 60). Alas, I had only a few ounces of this one, as well as their Lugene Chocolate Milk Stout; the latter was a bit much amid all of the stouts and IPAs I sampled, but I’d gladly give anything from this brewery a shot, and you should as well.

My Beer of the Week for our January 28 spot was Sierra Nevada’s Hoppy Lager, the latest from their Beer Camp Series, and a variant of a collaboration they did with Ballast Point (called Electric Ray) for their Beer Camp 12-pack, though they’ve lowered the ABV this time around, from 8.5% to 7%. It’s a blonde lager, with Citra, Equinox, Palisade and El Dorado hops, and while it’s certainly more bitter (55 IBU) than even Brooklyn Lager (33 IBU), it’s not going to be mistaken for an IPA. I have to admit, I went through the ones I bought rather quickly — lagers seem to be all about guzzling — so I’m eager to try it again while it’s still around.

Finally, I had hoped to highlight Sixpoint’s new Beast Mode as a Beer of the Week entry. But jeebus cripes, it’s a dud that does nothing to halt my impression that my once-favorite local brewery has jumped the shark after a year which saw them discontinue their distinctive 16-ounce “nanokeg” cans, reformulate Sweet Action and take their Brownstone and Righteous rye — my two favorites of theirs — out of can circulation entirely. I had a fairly bitter exchange with their social media clown on Twitter back when they ditched those two, and was told, “move on to the awesome lineup of new formulations we are set to drop over the next 18 months…”

Well, move on to something else, kiddies. Ostensibly a hopped-up porter, Beast Mode is really too watery and overcarbonated to be described as such. It’s maybe more of a black IPA than a porter, albeit still way short on the roasted malt flavor. “Lots of bark but it won’t bite,” claims their web site, and that’s a sad epitaph for a beer. Particularly one from a brewery that’s done some great darks in the past — 3Beans, 4Beasts, Autumnation, Brownstone, Diesel, Gorilla Warfare Coffee Porter, Otis Stout — this is somewhere between aberration and abomination. I bought a six-pack a week ago, hoping that it would turn the tide of my recent disappointment in them, but I still have two left, that’s how un-fucking-excited I am to tuck into it. Least Mode — there, I said it — is the third straight sixer of theirs I’ve lost interest in before it was gone, following Global Warmer and Sensi Harvest.

Anyway, thanks to a great new local bar down the street, I’ve got a backlog of excellent local beers I’d rather highlight than rail against Sixpoint, so I’ll focus on those next time around.

* If you want to know: I wrap each bottle individually in an article of clothing – t-shirt, socks, jeans, underwear, whatever, then pack as many as I can into a plastic shopping back (preferably a thick one, not a flimsy grocery-type bag, so that they’re wedged together firmly, with no glass-on-glass or other jostling possible.

** While I like to refer to the BA numbers, I have long resisted the temptation to throw numbers on beers myself — not even 1-5 stars, or the 20-80 scouting scale. I spend enough time dealing with quantification in my day job and my book-writing, and while I respect the efforts of the BeerGraphs folks, that’s not my pint of ale.